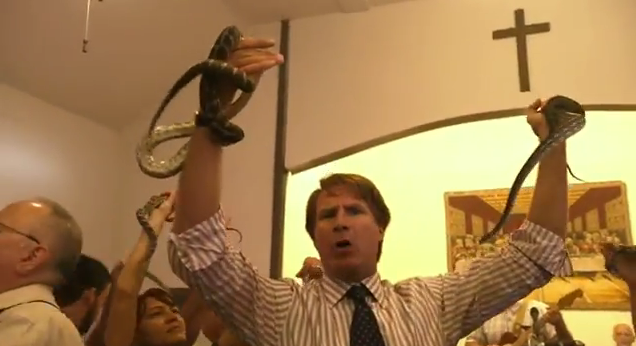 I finally got around to watching Will Ferrell’s ‘The Campaign’ this past weekend.

It’s a classic Will Ferrell comedy, Save Jerseyans. Unnecessarily crass, a little strange, but definitely entertaining and not-without any “smart” moments (see Ferrell’s hilarious “backbone” speech montage in the very beginning of the film).

A quick plot synopsis (no spoilers): Will Ferrell plays a veteran Democrat congressman Cam Brady from North Carolina; he’s a John Edwards-inspired character complete with womanizing appetites, charisma in surplus, Goldman Sachs loyalties and a disconcerting obsession with his own luxurious mane. Prepared to run unopposed in November despite a brewing sex scandal, Rep. Brady runs into trouble when a small town tourism guide, endearingly naive politico but fundamentally principled Republican family man Marty Higgins (played by Zach Galifianakis of The Hangover fame) is recruited by the shadowy “Motch Brothers” (read “Koch Brothers” – played by John Lithgow and Dan Aykroyd) — unbeknownst to Huggins — so that they can defeat Brady and further their sinister business interests.

I know what you’re thinking… typical Hollywood liberal nonsense! Why would any self-respecting conservative shell out $12 to be subjected to anti-Koch propaganda?

That’s one way to look at it…

Trust me: it’s not as bad as it sounds (without giving anything else away).

I enjoyed most aspects of ‘The Campaign’ precisely because I didn’t take it too seriously. How can anyone take Will Ferrell or Zach Galifianakis too seriously? Both parties receive equally harsh treatment throughout, and if you’re stubbornly looking to walk away with a deeper intellectual experience, you might as well opt for Netflix instead: the overarching theme of ‘The Campaign’ is simply that both parties have been corrupted by corporate/special interest cash. An uncontroversial point to most average Americans, but nevertheless an extremely lazy point if we’re being honest, Save Jerseyans.

First of all, without broaching the complex First Amendment dimensions of the campaign finance debate, anyone who thinks corporations hijack elections doesn’t know the numbers. Take oft-maligned Koch Brothers, who donated roughly $12.68 million to political causes between 1989 and 2012. During that same time period, American labor unions combined for over $602 million! Citizens United simply helped even the odds a bit (though the public sector still generally pull more weight than the private sector – Scott Walker’s Wisconsin is a recent positive development away from this dynamic).

It’s also worth considering one of my favorite themes here at Save Jersey: manure attracts flies! Despite his 2008 campaign promise to rebuke lobbyists, K-Street is bigger and badder than ever under the Obama Administration. Not surprising in the slightest; as government grows and there’s more federal dollars to spend, special interest groups from every sector (private, public, political and non-profit groups alike) have a perverse incentive to spend their money in the hopes of convincing Congress to give them our money. The most effective campaign finance reform would be draconian federal spending reductions! Less crap, less flies. No wonder Jefferson and Adams thought farmers would make the best politicians!

But hey… don’t forget we’re reviewing a comedy here, folks, and ever since Mr. Smith Goes to Washington inspired a generation to stand up to fascism, base populism typically sells well at the U.S. box office (even when the moral of the tale is a little sloppy). Not that I’m suggesting ‘The Campaign’ is Capra quality by an means. ‘The Campaign’ nevertheless worth a trip to the local cineplex if you’re in a movie-going, not-interested-in-anything-serious-because-the-polls-are-depressing-you mood this upcoming weekend. I suspect campaign-savvy Save Jerseyans will find the speech/debate segments particularly amusing…

31 thoughts on “MOVIE REVIEW: ‘The Campaign’ is Worth Your Vote Despite Its Flawed Premise”