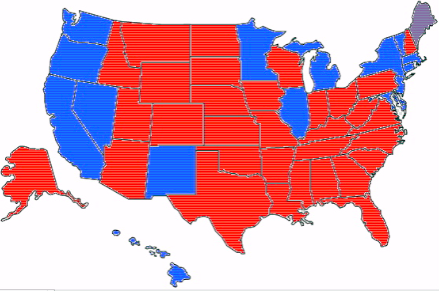 One day to go, Save Jerseyans.

Building off of our final 11/2/12 projection (without toss ups included), I’ve decided to take a shot in the dark and eliminate leaners/toss ups from our final Save Jersey electoral projection. This is my political nerd version of living dangerously…

The same basic methodological rules apply as before. Of particular note, I’m still refusing to put any stock in absurd polls with turnout models that will never be realized. Case in point? Last night’s CNN poll (akin to a recent Q poll in VA) wherein Mitt Romney manages to (1) win Independents by 22-points but (2) still finds himself tied with the President, 49-49, owing to a… D+11 turnout model? When Dems managed just D+7 in ’08?

Think Arizona, but significantly more Hispanic and with a strong union-backed machine based in and around Las Vegas. All hope still isn’t lost. Obama’s leads are persistent but close and yes, a bit skewed. Lots of NRA members outside of Clark County. There’s also not-so-bad data in certain bellwethers like Washoe County. I’m primarily throwing this one to O because Romney is on the air more than he’s on the ground. He seems to think it’s not his best shot of the Obama so-called “firewall” states. So why should I?

Obama is far less attentive to North Carolina than Mitt’s been to Nevada. The President hasn’t been there in some time… a North Carolina convention helped him not at all, and the gay marriage amendment provided a stark demonstration of GOP strength in the wake of 2010. He effectively abandoned the state after initial early voting totals showed OFA upside down versus 2008. Now it’s Romney in a walk.

Bush came relatively close here in 2000 (D+1) and 2004 (D+6). Mitt has committed more resources to the project than ever before, due in part to his efforts in overlapping New Hampshire media markets, and I expect it to pay dividends in terms of a +1 to Romney’s electoral tally by Wednesday morning.

New Hampshire is a fiscally conservative state where the economy is issue #1 and Mitt Romney has, unsurprisingly, shown real strength. Mitt’s put in the time. You could even make the argument that Bush only lost here in ’04 due to the War in Iraq. In a close race, GOP enthusiasm and the Granite State’s proclivity to back spirited challengers makes me think Romney will win. John Sununu is set on it.

The Sunshine State is the only battleground state more solidly in Romney’s column than North Carolina. He’s up there consistently in skewed and legit public polls, and the Democrat early vote lead there is down 270,000 votes (or 75%) versus 2008. That’s more than President Obama’s 2008 margin of victory. Obama will need a miracle — like better than ’08 turnout that can only realistically occur in Nate Silver’s wildest fantasies — to prevail there on Election Day.

Like Florida, Mitt Romney consistently maintained a RCP average lead here for weeks despite the inclusion of badly skewed polls (and excluding that last ABSURD Q-poll showing Mitt down two despite winning indies by 21-points). Obama’s Northern VA counties (Arlington, Alexandria, etc) are way off their 2008 mark in early voting while Southern and Coastal GOP areas are coming out much stronger than before. This absentee tracker from Cook Political is also very telling. Obama’s win here in 2008 had a lot to do with changing demographics in Northern VA and the super-margin he generated there; all reliable indicators tell us they won’t materialize again this year. Expect the Old Dominion to revert to its old habits and go Republican by a healthy margin. George Allen may even catch the wave.

Unlike most 2012 battlegrounds, Republicans are actually ahead here in early voting and outnumber Democrats in voter registration (the former stat representing an especially shocking reversal from 2008), and the President continues to poll well under 50% to boot. ‘Nuff said. This is a traditionally Republican state with a lower percentage of Hispanic voters than state like Nevada and New Mexico where Mitt’s campaign has had significantly less success breaking through. Prediction: the entire Colorado Rocky Mountain Range will be renamed “Red Rocks” after Tuesday. Take it to the bank.

President Bush narrowly carried Iowa in 2004 when John Kerry ramped up an 11-point early voting advantage. Obama’s current advantage? 10-points, a far cry from his 17-point 2008 margin. Romney was there the other day and seems to have tapped into the Hawkeye State’s disappointment with their “adopted” Democrat son. The Des Moines Register endorsement may not move the needle, but the fact that Iowa’s paper of record hasn’t backed a Republican for president since Nixon tells you that it’s an acknowledgement of the needle already having moved. Advantage: Romney.

There’s plenty of reasons to think Michigan is winnable. Mitt has roots there, granted. Public polling is also tightening; one out Sunday even showed Romney ahead by a sub-point margin. The Catholic HHS backlash could produce an upset here though the auto bailout remains popular (for now). My gut? The Romney campaign is on the air but, much like Nevada, hasn’t invested significant candidate time in the Wolverine State in the closing hours of this campaign for a reason. They must think Wisconsin, Pennsylvania and yes, Minnesota, are superior opportunities.

If there’s one state I’m wrong about heading into Tuesday, Save Jerseyans, this could be it. And what a shock it’d be! Minnesota’s been a hardcore Democrat bastion for many years (this is, after all, the state that elected Al Franken!). It was also the only state Reagan dropped in 1984, and Obama carried it by 11-points in 2008. That said, the most recent public poll puts Romney ahead 46% to 45%. He wins comfortably if it’s correct… incumbents in two-way races can’t prevail polling at only 45%. I’m also interested to see what effect, if any, Minnesota’s marriage ballot question has on turnout (new polls suggest a photo finish).

We’re not predicting Minnesota for Romney because, similarly to Michigan, he’s not pushing very hard for it. Paul Ryan went there on Sunday night, but it’s reminiscent of Dick Cheney’s Hawaiian trip in the closing days of Election 2004. No real “force” behind it. Mitt’s not spending a whole day there like WI or PA. Romney’s ad buy there is also relatively small although third party groups have spent plenty on his behalf and moved the needle in his direction. No additional appearances are scheduled between now and Tuesday’s close. I suspect these factors are a subtle yet strong indication of where Minnesota ranks on the Romney campaign’s possibilities list… not impossible by any means, but lower than the next two states on my list…

Wisconsin was extraordinarily close in 2000 and 2004. How close? George W. Bush lost by less than 1-point both times! But what’s different this time around to give rise to my confidence? Wisconsin continues to trend Republican as Scott Walker’s recent victories attest. His successful recall defense acted as a dry run of sorts for the Wisconsin GOP. It’s one place where the GOP’s ground game is indisputably stronger than the President’s own. Paul Ryan’s presence on the ticket can’t hurt given it’s his home state. Mitt was just there for a huge rally and the GOP continues to dominate the airwaves in another state where O can’t consistently reach the “safe” 50% mark. I have a good feeling and expect it to (finally) go red; Tommy Thompson’s fate depends on it.

There’s so much that can be said about Ohio, Save Jerseyans, but I’ll zero in on one fact which weighed heavily in my analysis. As of this past Saturday, the Ohio GOP had increased its early turnout totals over 2008 by approximately 100,000. Democrats? They’re down 150,000 from four years ago. That’s an epic swing in a state that President Obama carried by just 260,000 votes in ’08. And that’s why Democrat chest-thumping over bogus skewed polls and early voter “leads” should be dismissed in my humble opinion. Mitt Romney continues to lead solidly here (and virtually everywhere of consequence) among (1) independents and (2) those who plan to vote on Election Day.

I’m willing to wager that the President didn’t get what he needed out of their early voting effort (and I’ve heard chatter to back up my conclusion). That’s the REAL reason why he’s still traveling to Florida, Virginia and Colorado in recent days. NOT because Mitt is truly “playing defense” as Messina and Axelrod claim on the Sunday shows. OFA is prepared for the real possibility that they’ll lose the Buckeye State tomorrow.

This is my most audacious pick, Save Jerseyans, but I assure you it’s grounded in fact. And I’m not referring solely to the new poll showing a tied 47-47 ballgame. Check out Jay Cost’s explanation which is right on the money; in brief, if Romney can win the non-Philadelphia counties by a 54-46 margin (a bit better than Bush in 2004), then President Obama must do better than Kerry ’04 and Gore ’00 in Philly proper. He did well enough there in 2008 (about 40k more than he’d need under Cost’s framework). The problem for Dems? Bob Casey’s struggling reelection campaign stinks and continues to under perform; most analysts seem to think Mitt may’ve caught the Philadelphia machine with its pants down, and since 90% of PA voters wait until Election Day, Mitt’s ads matter more and Dem turnout is riskier for having been limited to one day.

I’ve been told there’s very little tangible Obama activity in Philadelphia right now compared to 2008 when signs and canvassers littered every corner. I’m going to go out on a limb to say Mitt Romney’s stars line up in the Keystone State.