Tom Brady and Richard Nixon: Gates of a Feather 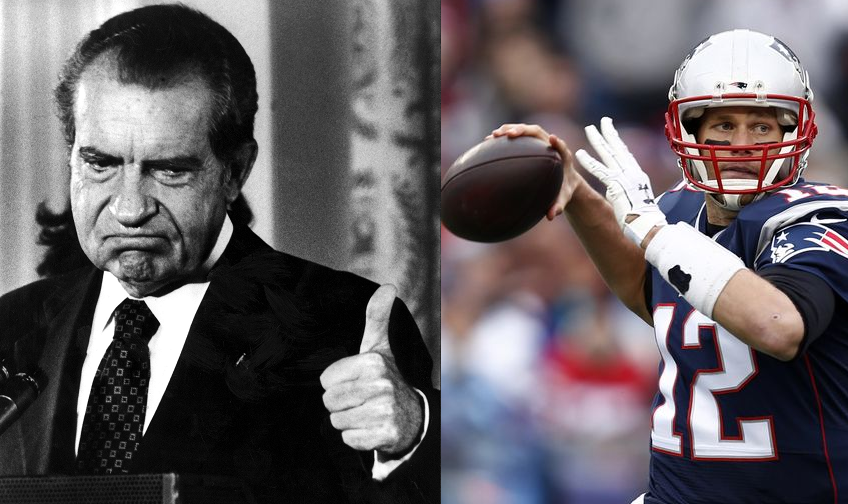 It’s appropriate that the kerfuffle over Tom Brady’s flabby balls had the sobriquet “gate” appended to it since it shares a striking resemblance to the original, if you will, “gatescapade” that ultimately cost Richard Nixon the White House and a strong legacy in American History.

Deflategate and Watergate are more alike than they are different.

The Indianapolis Colts were to the New England Patriots what Sen. George McGovern was to Nixon during the 1972 presidential election campaign: total, complete and utter cannon fodder.

There was no way in hell Brady and his Pats were going to lose to the Colts, who more or less sat out the game anyway, in the same way that it was a foregone conclusion that McGovern would get annihilated by Nixon, New York Times film critic Pauline Kael’s reputed aphorism about knowing only one person who voted for him notwithstanding.

Both were going to win, and win BIG, so what in the name of all that’s sane and holy did they have to gain by screwing with the balls or covering up the bugging of the offices of the Democratic National Committee? What pathology drove them to have the need to cheat when the game and the race were already in the bag?

So, Brady gets benched for four games and the Pats lose a first-round draft pick and are fined. And they now have a permanent stain on their otherwise superhero-status image and record. Maybe not as bad as Major League Baseball’s drug-using asterisk players like Barry Bonds, Mark McGwire and Alex “A-Fraud” Rodriguez, but bad enough in its own right.

As for Nixon, he got benched from American politics forever plus a one-way helicopter ride to Andrews AFB followed by a final trip on Air Force One to San Clemente, so there’s that.

I’m waiting for Tom Brady to formally proclaim to the media, “People have got to know whether or not their fav QB is a crook. Well, I am not a crook. I have earned everything I have got.”

In case you’re wondering where he got it:

Yes, Virginia, history does repeat itself. Maybe the venues and the exact settings aren’t identical, but the same stupid crops up as if on-demand.