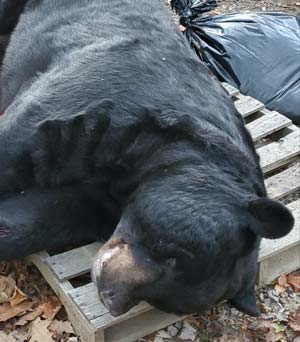 The monstrously-sized 23-inch, 700-pound black bear shot in Morris County on October 14th is apparently the biggest bow-harvested black bear in all of North America. The catch comes at a time when the Murphy Administration has dramatically curtailed the scope of the annual hunt which conservationists believe is important for the regional ecosystem and human safety.

“Let this finally dispel the fountain of misinformation pushed by the Governor and his anti-hunting extremist allies regarding the health of our black bear population,” said New Jersey Outdoor Alliance (NJOA) spokesman Cody McLaughlin. “Not only is this the first ever Pope and Young world record animal out of New Jersey, but it is no accident that it is a black bear. The entire NJOA board and, indeed, every hunter in New Jersey offers their sincere praise of the hunter who harvested this bear and we wish him even better luck in future seasons as we fight to protect his right and everyone else’s to pursue these safe, ethical and scientifically-backed sports.”

Black bears in New Jersey are more than just large.

They breed produce litters of 3 or 4 cubs, well above the average of 1 to 2 in other states. As a result, roughly two black bears are born for every black bear harvested annually in the Garden State.