Yesterday I discussed the direct correlation between the Obama Administration’s partial embrace of Bush-era counter-terrorism tactics and the death of Osama Bin Laden. It’s becoming clearer by the hour how “direct” the link actually is, Save Jerseyans.

Believe it or not, the story of Osama’s demise began in President George W. Bush’s first term (via FoxNews): 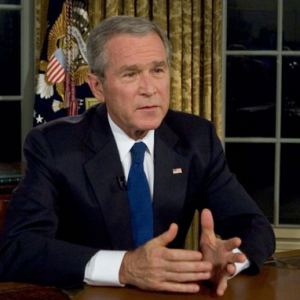 The initial threads of intelligence began surfacing in 2003 and came in the form of information about a trusted bin Laden courier, a senior U.S. official told Fox News on condition of anonymity. Bin Laden had cut off all traditional lines of communication with his network by this time because the Al Qaeda leader knew the U.S. intelligence community was monitoring him. It was said that he also didn’t even trust his most loyal men to know his whereabouts and instead communicated only through couriers.

But it was four years later, in 2007, that terror suspects at the Guantanamo Bay military prison started giving up information about the key courier.

Around this time, the use of enhanced interrogation tactics, including waterboarding, a form of simulated drowning, were being denounced as torture by critics of the Bush administration. President George W. Bush and Vice President Dick Cheney came under intense pressure for supporting rough treatment of prisoners. Critics claimed that any information given under duress simply couldn’t be trusted.

To his credit, we now know that President Obama’s Administration grabbed the baton and acted on Bush-era intelligence successes in the hunt for Osama:

By 2009, the U.S. intelligence community had a rough idea of where the courier operated: a region north of Islamabad, Pakistan. It was another year before this compound was identified in August 2010 as a likely home for a senior Al Qaeda member.

The compound was eight times the size of other homes in the affluent neighborhood, and the impressive 18-foot-high walls with barbed wire drew scrutiny from intelligence analysts.

By early this year, information from multiple intelligence sources, including the now-shuttered harsh interrogation program, as well as CIA operatives and Special Operations Forces on the ground in Afghanistan and Pakistan, were building a clearer case that the compound might house bin Laden. Officials found out that there were three families living there. In addition, a significantly older man, who was shown deference by the group, was not required to work on the compound.

The result of all of this will be a temporary albeit significant polling bump for the President. Here’s a political humble suggestion for the commander-in-chief, free of charge from a Republican who won’t vote for him in 2012 but certainly loves the country more than partisanship: if he enjoys his renewed popularity, then President Obama should seriously consider reviving the interrogation policies that were responsible for this triumph!

The Obama Administration has nothing to lose and the United State has everything to gain! The only losers will be Osama’s remaining, unaccounted-for sycophants who have to be feeling the heat today.