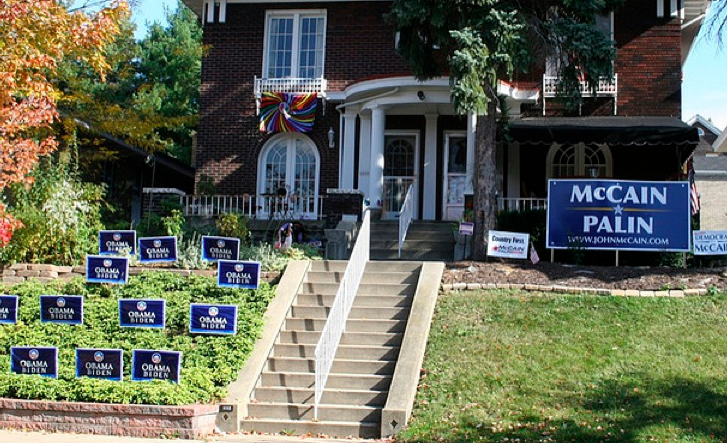 The bane of every dedicated campaign worker’s existence is the species of volunteer that never actually volunteers to do anything except for the least useful activity of all… putting out yard signs.

Does this sound familiar?

Yard Sign 101: they are often derided because painted pieces of particle board and plastic aren’t really “targeted,” particularly when they’re littering roadways instead of lawns. Modern campaigning is a 100% turnout operation; it is designed to identify potential supporters, reach them with a requisite number of “touches” (e.g. phone calls, mail pieces or door knocks) , build name recognition and, when the big day arrives, make sure said supporters (1) remember to visit their local polling station (2) with your candidates’ names on the tip of their tongues. It’s not quite science to be sure, but it’s also something more than art. The important point is that yard signs can’t help accomplish the GOTV goal better than a bumpin’ phone bank.

At the same time, I think yard signs too often get a bum wrap. They serve an important purpose particularly at the local level IF used correctly. I did say, after all, that they are the “least” useful campaign tool, implying that there is at least a little inherent utility to yard signs. For example, they’re a relatively cheap and easy way to make supporters happy and enthusiastic. Ask anyone from the McCain-Palin effort about the consequences for morale of overlooking yard signs! Most people feel a need to passively-agressively externalize their position to the world, much like a “cause” ribbon or a “my kid is an honors student” bumper sticker. You can’t fight human nature.

I also think there exists a certain “strength in numbers” or zeitgeist effect that comes from a voter observing a candidate’s sign adorning multiple lawns in their part of town. For example, if you reside in a strongly Democrat community and your challenger is new to the game, then neighbors may feel more comfortable backing your Republican candidate if that’s what other people appear to be doing and, as a result, the GOP candidate doesn’t seem like an unpopular lost cause. Because, ya know, is sign is everywhere. Again, something that isn’t entirely scientific but no less real for it.

More often than not, even though seeing a sign may not change someone’s mind, residential yard signs can convince a voter otherwise predisposed to support your guy or gal to get off his or her butt and actually engage the election by going to the polls! I don’t think, however, that seeing fifteen signs crammed at the entrance to a neighborhood Wawa or the onramp to I-95 has the same desired effect… that just looks like someone had WAY too much time on their hands.

To summarize, your Blogger-in-Chief’s two cents on yard sign methodology for the local political novice: Don’t be afraid to buy clearly marked, minimum-verbage signs featuring your candidates’ (1) name as it appears on the ballot, (2) office sought, (3) website listed, and (4) the “paid for” as required by ELEC! Resist the urge to put catchy slogans, color photos or bullet points from your platform on the sign; people “look” at these things but usually don’t read them. That’s a major marketing difference that candidates need to internalize.

The key for newbies is to resist breaking the bank betting on yard signs to carry the day, or at least refrain from producing them to the point where you can’t afford superior, targeted campaign materials like attractive, properly-messaged direct mailers.