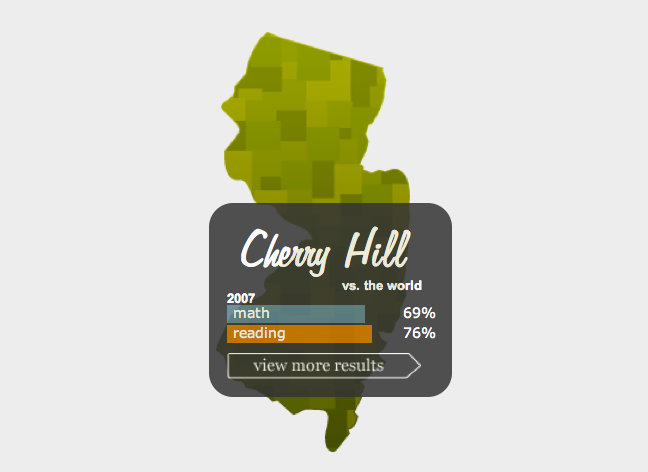 I’m can’t stop playing with it! The most stunning finding: 17 American states don’t have a single school district placing in the top third percentile for international achievement.

And yes, the cities are in bad shape. No news there. Camden City ranks just 18% in Math and 19% in reading when compared to the rest of the world. That’s a THIRD world performance, Save Jerseyans. However, what will really surprise some folks is how the suburbs aren’t exactly kicking butt either. Gloucester Township is only 20 minutes from Camden City. It’s a suburban community with a fairly-typical mix of middle class taxpayers. G-Town’s math score is a mediocre 64%… not too hot at all by the standards of other industrialized nations. The relatively wealthy Township of Cherry Hill isn’t doing much better at 69%.

So how exactly does the Global Report Card (GRC) work?

The GRC score indicates the level of math or reading achievement by the average student in a district when compared to the achievement in a set of 25 developed countries. The score is presented as a percentile, which is the percentage of students in the comparison group who would have a lower level of achievement. For example, a percentile of 60 would mean that the average student in a district would be performing better than 60% of the students in the comparison group.”

Click here to research your home school district. Expect to be surprised.

The takeaway lesson is that “school choice” isn’t an imperative for inner city schools only. To regain our global competitiveness in the age of globalization, American schools need to pick it up across the board (AND QUICKLY) in pretty much every community regardless of socioeconomic composition.

Moreover, the tired claim of the New Jersey Education Association (NJEA), that New Jersey schools are second-to-none, is only partially correct. We’re very competitive nationally; internationally is an altogether different matter, and this disparity will clearly continue to impact our unemployment rate.