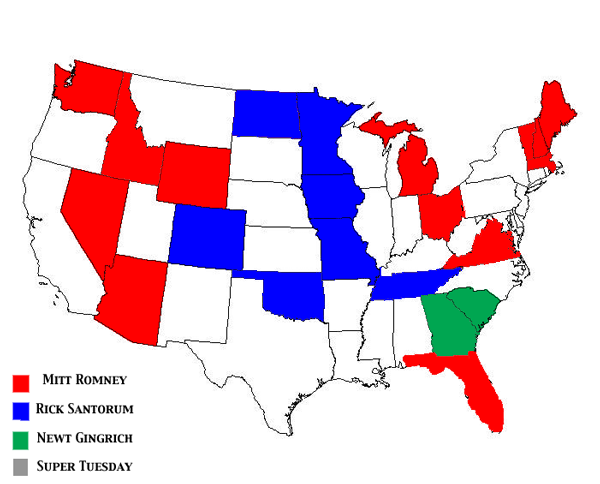 12:25: I don’t care what the networks say, Save Jerseyans, but Mitt Romney won Ohio tonight (the Associated Press agrees). He’s up 12k votes with 96% reporting.

Romney may end tonight with 200+ new delegates from 10 different states. He’s the popular vote winner in 5 of 10 (Alaska is still outstanding owing to the time difference).

The Romney campaign believes Ohio should’ve been called long ago. I agree! Congrats to the former Governor…

12:05: The networks are still reluctant to call it, but Romney is now out in front with a 7k vote Ohio lead.

Santorum is unlikely to close that margin…

6:57 p.m. – Polls in Georgia, Virginia and Vermont close at 7:00 p.m. GA will be a win for Newt; the only question is by how much. The later two will be in Romney’s column. Click here to read my Super Tuesday Eve state-by-state analysis if you missed it.