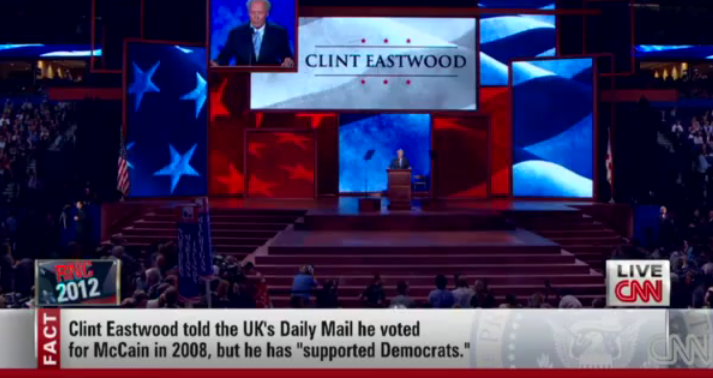 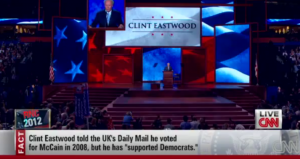 Clint Eastwood’s monologue at the Republican National Convention was met with mixed reviews. Not surprisingly, the conservatives loved it and roared their approval. Endlessly portrayed as out-of-touch nerds by the media, they basked in the presence of one of Hollywood’s true icons.

Look up “cool” in the dictionary and I’ll bet there is a reference to Clint Eastwood somewhere.

Meanwhile, the liberals, stung by the truth of Eastwood’s words, chose to attack the messenger instead. Dismissing him as a geriatric suffering from Parkinson’s, they turned on one of Hollywood’s elite for having the audacity to be a free-thinker.

So much for being the party of tolerance and inclusion.

Despite a somewhat faulty delivery, Eastwood delivered a host of devastating one-liners. He sarcastically referred to Vice President Joe Biden as “the intellect of the Democratic Party” and “kind of a grin with a body behind it.”

“I never thought it was a good idea for attorneys to be president, anyway,” the Outlaw Josey Wales deadpanned. “I think it is maybe time for a businessman.”

Clint went on to chide the Democrats – and President Obama in particular – for promising to close Guantanamo Bay, attempting to try terrorists in the heart of New York City, and fighting a war in Afghanistan that the Russians has already shown was problematic at best.

Then, of course, there was his knockout punch. “And when somebody does not do the job, we got to let them go,” Dirty Harry stated matter-of-factly as he drew his finger across his throat.

But that wasn’t the best of Eastwood’s lines. The key – not only to Clint’s speech, but also to his political philosophy – was comprised of two sentences and just 11 words.

“You, we – we own this country,” said the High Plains Drifter. “Politicians are employees of ours.”

Those few words, eloquent in their simplicity, could have been written by Thomas Paine or penned by Thomas Jefferson.

Those few words, spoken by a citizen who just happens to be an actor, are the basis for our founding documents, from the Declaration of Independence to the Constitution and Bill of Rights.

Those few words, which every government official should place on his desk or post on his office wall, provide the best description of a democratic republic I have ever heard.

When a public officeholder forgets that he or she is hired by the voters, they need to be removed from that office…and the sooner, the better.

That doesn’t mean that our elected representatives are to be doormats, forever shifting their positions according to the public’s whims. On the contrary, it simply means that they need to sublimate their own ambitions and interests to the common good.

The key, Clint would say, to being an effective officeholder is to remember where you came from and who you were elected to serve.

After all, the voters – individually and collectively – are your boss.  That’s the American way.

67 thoughts on “We Own This Country”