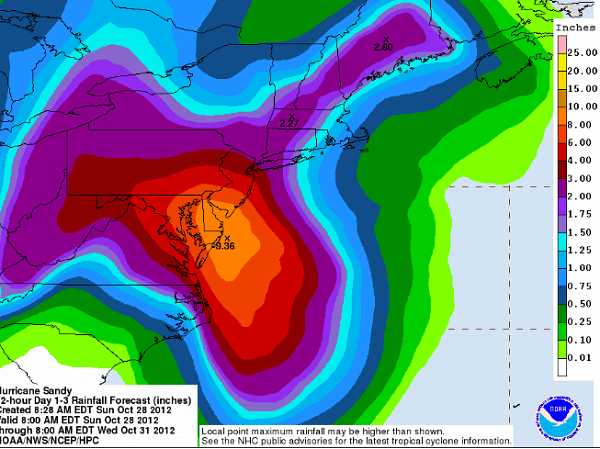 Here’s the latest Hurricane Sandy the “Frankenstorm” news, Save Jerseyans, from the Governor’s office and the Office of Emergency Management.

FYI- Save Jersey is merely conveying news to you as we hear/read it from official sources; all residents should primarly rely on www.ready.gov for the most current information:

And where is Sandy right now? What’s the latest re: its track?

The latest “most likely” track for Hurricane Sandy has shifted slightly south along the Jersey Coast late Sunday morning with a Monday night or early Tuesday morning landfall now projected to a bit south of Atlantic City. This would potentially mean a greater storm surge farther south along the coast and closer to our local beaches. The track could change again, but this latest adjustment does not bode well for coastal communities. Also, the winds associated with the storm are growing on forecast models and widening. This could mean that a larger portion of the area could see the strongest winds; gusts over 80 mph are not out of the question in the hardest hit areas.” [Emphasis Added]