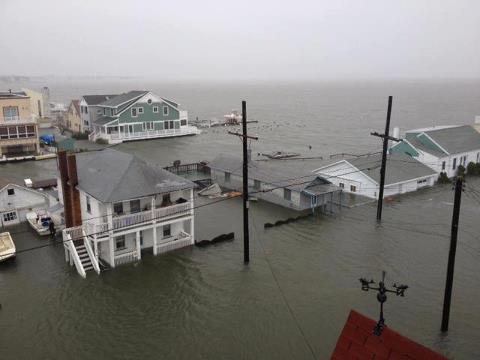 Every Jersey Shore town is getting smacked by Hurricane Sandy today, Save Jerseyans, but Ocean City (Cape May County) is among the worst hit. It’s always prone to flooding particularly in its midsection, but this level of water-induced destruction hasn’t been seen in generations.

Update #2: Information coming out of Ocean City and the barrier islands is understandably confused. Rescues, fires, etc. and so on. I’m told one of the city’s bridges, used heavily by tourists in the summer months, is now completely underwater… WPVI reported but trying to confirm which one… several folks online have also reported, though it remains unconfirmed, that the 14th Street Fishing Pier that jets off of the Ocean City Boardwalk is damaged… web cameras mounted near/on the pier suggest that at least part of it is still standing… (Note: an earlier circulated report erroneously referred to the wrong Ocean City)… developing…

This incredible pic is making the rounds online; I believe it is (or was) 10th Street: