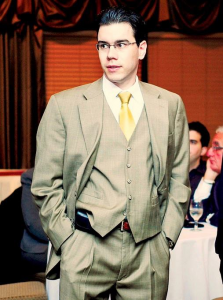 In my effort to introduce candidates to the voting public, I started a weekly column called Meet the Candidates. In essence it is a past day stump speech updated for the virtual world.

For this week’s column I am pleased to introduce to you fellow SaveJersey.com contributor and one of the smartest men I have ever met, Jordan Rickards, Esq. Jordan is running for Middlesex County Freeholder and I could not have picked a better candidate to do so.

He was born on May 11, 1979. Attended Liberty University for his B.A. in History and then went on the get his JD from Washington and Lee University. Upon graduating from law school, Attorney Rickards worked in the Attorney General’s office and then became a Middlesex County Superior Court prosecutor for three and a half years until he left to start his own law firm in Milltown.

The following is my interview with Freeholder Candidate Jordan Rickards, Esq….

Sanders: Just the other day, the current Middlesex County Freeholders announced their 2013 budget includes a tax hike of less than $20 per year for the average homeowner. They touted this as being an accomplishment. Do you see it as so? Why or why not?

Freeholder Candidate Rickards: Accomplishment!? There are approximately 3,100 counties in the United States. Even before the Democrats’ most recent tax hike, Middlesex County had the 20th highest property tax burden out of those 3100. That means that 99.35% of all counties nationwide had a lower tax burden than Middlesex. And now that the Democrat Freeholders have increased that burden even further they want congratulations? When elected officials consider it an accomplishment to solve their greatest problem by making it worse, then they’ve been in office too long.

Sanders: It is speculated Barbara Buono will carry the Middlesex County Democrats to victory this year because she has been very popular in the county. Do you think this is true or is it the Republicans turn this year?

Freeholder Candidate Rickards: Yeah, right. Go into any supermarket and see how long it takes you until you can find anyone who can tell you who the Democrat nominee for governor is. Or better yet, ask them who the current state senator is for the 18th legislative district. You’ve got a better shot of finding someone who can recite the number pi to the tenth digit.

Barbara Buono, like almost all of our state legislators, think everyone knows who she is, even though almost nobody does. The most recent poll has Christie up 58-22 on her, and that’s not a typo. I honestly think she’d poll better if she had her name legally changed to “Generic Third Party Candidate.”

In fact, those numbers are even worse for Buono when you consider the percentage of the vote Christie has once you eliminate “undecideds.” In that scenario, he receives 72.5% — calculated as 58÷(58+22) — to Buono’s pathetic 27.5%. That’s a 45 point drubbing. You could run any number of disgraced Democrats instead of her — Corzine, McGreevy, Florio — and they’d poll better.

And they’d probably fundraise better too. I was at a fundraiser a few weeks ago where Christie raised over $500,000. When Buono does fundraisers she gets about 5% of that. That’s not an exaggeration. And Christie has been going all around the country raising money, even from Mark Zuckerberg, cashing in on all the favors he’s done for Republicans nationwide, as well as on his frontrunner status for the next Republican nomination for president. It’s like every state has its own “Chris Christie ATM” that just prints out thousand dollar bills.

Besides, if Buono was so popular, the Democrats wouldn’t have her on this political suicide mission. I’m sorry, I just have to say how hysterical I find it that in a dark blue state full of prominent Democrats, none of any significance had the stones to challenge Chris Christie. I’ve never seen anything like this. The Democrat nomination for Governor was there for the taking — in a state that Obama won in a landslide without even trying just two months ago! — and they all ran scared from the opportunity like the neighborhood kids from “A Christmas Story” whenever they would encounter that yellow-eyed bully and his stoolie. Obviously, guys like Codey, and Booker, and Sweeny all ran their polls and saw it was Mission Impossible. At the end of the day, Buono became the sacrificial lamb, whether or not she realizes it.

And when I say “suicide mission,” I don’t just mean for this election. I mean, her political career’s over after this, because she had to give up her senate seat to make this run, and she won’t get it back because Pete Barnes is taking it (he having been smart enough to support the Sweeny Democrats, whereas Buono upset the Wisnewski establishment by supporting Codey). This should be especially worrisome to the soon-to-be unemployed Buono, who just a few years ago put out television ads telling voters to re-elect her to the senate because, I kid you not, she had no other job.

By the way, I doubt even Barnes will carry that seat. Don’t forget, we Republicans just stole the incredibly popular mayor from East Brunswick, Dave Stahl, from the Democrats to run as a Republican against Barnes for Buono’s old seat, and I fully expect Stahl to win. Judging by the conniption fit the Democrats have been throwing about this, I think they expect it to. Plus, the Christie people realize that Middlesex County is ground zero for campaigning, and they’re going to pour all kinds of resources into here this year. It’s no coincidence Christie just had a large fundraiser in New Brunswick, and is the keynote speaker at the Middlesex County Republican Convention.

So no, I’m not at all worried about her. She was anonymous and irrelevant before this campaign started, and she’ll barely be a footnote in history once it’s over.

Sanders: For those who do not know you, you were a prior Middlesex County Assistant Prosecutor, are a Mensa member and currently have your own legal practice all before the age of 40. While you definitely boast an impressive resume, how will your background help you if you are elected?

Freeholder Candidate Rickards: Actually, I was all those things before the age of 30. In fact, I passed the Mensa test when I was 8.

But to your question, my background working for the county has shown me how the county works, what doesn’t work, the areas of corruption and waste, who’s responsible for it, and why it continues. Additionally, my experience as a prosecutor contributes to my passion for law enforcement and heightened my naturally aggressive nature in hunting out the problems and those who cause them. For the voters, this means that I will stand up to the entrenched powers who don’t want change because they have a vested interest in the status quo, and restore responsible, incorruptible government to a county that has not seen it in decades, if ever. Even my enemies will concede that if I’m ever on the Freeholder Board, I’m not going to be some anonymous member who sits there quietly and reflexively casts votes. I’m going to be the one asking the tough question, and getting in the face of people who think that political influence should be for sale.

As to being a private practice lawyer, it has taught me how to deal with complex issues and reduce them to a logical coherence. Also, it has exposed me to the realities of what the law / government can do, and just as importantly (perhaps more so) its limits.

But I think perhaps the most relevant experience I have is running my own business. There’s a great difference between merely taking a position on something and actually getting it done. When you run your own business, you have to know how to get things done, and to that end you have to be attuned to thinking in terms of pragmatic solutions, as opposed to abstract theories, something our dear president still has not figured out.

Sanders: If your future constituents wanted to reach out to you and ask you questions about your positions or how to volunteer on your campaign, who can they reach out to?

Freeholder Candidate Rickards: For now, the best way to reach me is through the contact form on my website: www.RickardsLaw.com, or by phone at 732-297-8200.