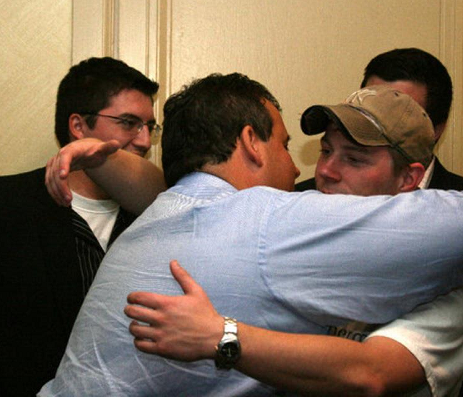 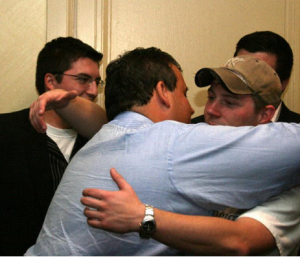 Save Jersey has learned that Frank Luna, veteran NJ Republican operative is no longer on staff at the New Jersey Republican State Committee.

More than one source, speaking on a condition of anonymity, cited a number of reasons behind the apparent shake up including personality conflicts, strategic differences and a push to bring in out-of-state staff. But this isn’t a gossip column, Save Jerseyans, so here’s hoping you’ll indulge me for a moment as I simply endeavor honor this guy’s extensive service to our cause. He deserves it.

Luna (who is pictured on the right  of this post with Governor Christie and yours truly on Election Night in 2009) was a key member of the Governor’s first gubernatorial campaign. Years before, Frank was credited with revitalizing the College Republicans in 2006 before cutting his teeth in New Jersey politics as the Political Director for Ocean County GOP. I personally spent many October nights eating cold pizza in beat-up motels, rented cabs and assorted campaign headquarters with Frank over the past several years when the state party had reached its nadir and statewide victories were a distant memory.

Frank Luna and I were both early believers in the Christie revolution. Truth be told, my friend Frank was one of two people with whom I consulted extensively before launching Save Jersey back in 2008. He played an undeniably important role in the site’s early formation. We bounced ideas off of each other at phone banks, over the phone and during GOTV events while we waiting for the candidates to finish working the room.

He acutely understood (when few others did here or elsewhere) that social media could help level the playing field for Republicans even in blue territory like New Jersey.

There is no word as of yet on Luna’s next move, but what’s immediately clear to me is the gaping hole that Frank’s present absence leaves in New Jersey Republican politics.

There are very few operatives in New Jersey on either side of the aisle with the passion and loyalty of our friend Frank Luna. If you don’t know Frank, ask someone at your next GOP committee gathering or local campaign event whether they do. Chances are you’ll elicit a hearty laugh, hear a good story, and develop a positive impression of your own without ever having worked with him as I’ve had the pleasure of doing on numerous occasions.

Here’s hoping we see Frank on the campaign trail — signature Yankees cap and endless Springsteen playlist included — in very near future. We’re going to need him in the ongoing struggle to truly save Jersey. He’s been at it for awhile.