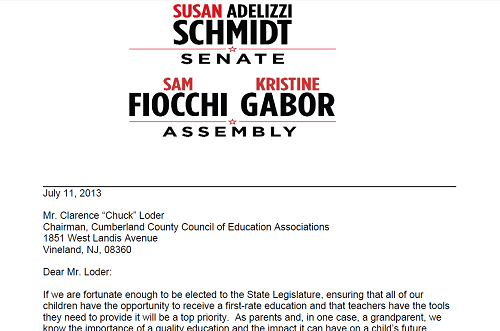 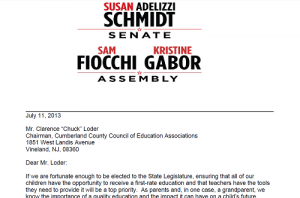 The LD1 GOP ticket is responding to an invitation from the New Jersey Education Association (NJEA) to screen for its 2013 legislative endorsement with a letter of their own questioning the fairness of the process.

Their concerns surround the NJEA’s apparent decision to support their opponents before the screening process is even scheduled to begin. For the Election 2013 cycle, according to a recent ELEC filing, the NJEA has already contributed $1 million through its own Super PAC, Garden State Forward, to a second Washington, DC-based Super PAC called “The Fund for Jobs, Growth & Security.” That PAC spent $16,000 in June 2013 on New Jersey’s First Legislative District in support of the Democrat ticket’s cause.

“If the NJEA had decided to fund our opponents’ campaign after meeting with us, it would be unfortunate but understandable,” said the campaign’s letter signed by all three Republican candidates. “However, since the NJEA decided to fund our opponents’ campaign before even offering us a chance to meet, I am sure you can understand our concern about the legitimacy of the endorsement process.”

If you’re new to the blog and aren’t familiar with how the NJEA does business, then go ahead and visit our archives on the subject. It’s eye-opening. Then-candidate Chris Christie made headlines back in June 2009 when he sent a letter to the NJEA declining to participate in their endorsement interview process. That’s when I knew it was love, Save Jerseyans…