How About Bono for Governor? 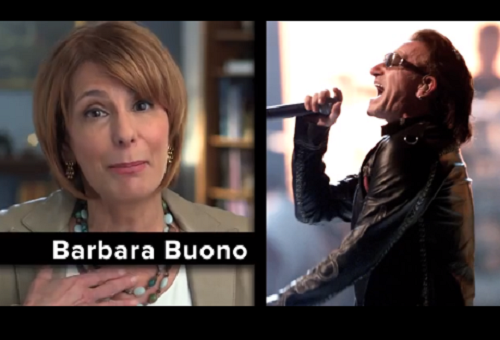 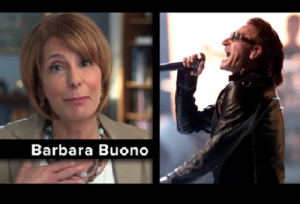 You may recall how Irish U2 rockstar Bono inadvertently played a role in the campaign of Barbara Buono (BWOH’-noh) earlier this year, Save Jerseyans.

Do you remember that God-awful name pronunciation ad?

With Election Day inching closer, frankly, I’m starting to think that Buono should go with the “Bono” (/ˈbɒnoʊ/) version after all. It’d only help her lukewarm name recognition. Bono’s politics are also a little less extreme than her own these days, at least when it comes to tax policy.

After recently coming under criticism for U2’s use of foreign tax shelters, the middle-age music legend responded by not only shrugging off his critics but also by defending Ireland’s relatively low-tax environment. It’s a hot topic across the pond as the Eurozone attempts to recover from the global recession/financial crisis and the Emerald Isle in particular raises new taxes in order to tackle its obligations.

“At the heart of the Irish economy has always been the philosophy of tax competitiveness,” Bono said in an interview. “On the cranky left that is very annoying, I can see that. But [that] is why Ireland has stayed afloat.”

Ireland’s corporate tax rate is relatively low when compared to international competitors, one of the reasons why the Irish also have an unemployment rate that’s low relative to many fellow EU member states.

Take a hint, Babs. Even bleeding hearts don’t really believe the crap that you’ve been pushing for two decades!

2 thoughts on “How About Bono for Governor?”