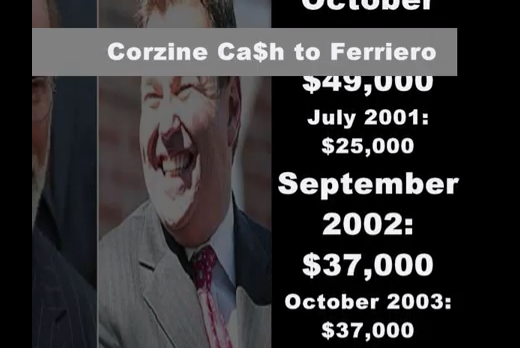 Then something strange happened. Almost one year later, the Supreme Court shrunk the scope of theft as characterized by the so-called “honest services” anti-fraud law. That led Judge Stanley R. Chesler to set aside Ferriero’s conviction. Talk about luck for someone who doesn’t deserve it!

But don’t worry… karma is bigger than all of us. Now he’s under indictment. Again. This time, the boys in blue are after him for an alleged racketeering scheme. Since this is Throwback Thursday after all, Ferriero’s latest legal plight reminded me of a classic Save Jersey web video from the final days of the Election 2009:

The Bergen GOP couldn’t have asked for a better gift in the midst of what looks like a tough cycle for their county organization, Save Jerseyans…

Of course, their struggles are largely attributable to self-inflicted wounds.

The endless intra-party feuding in Hackensack needs to end or a group of politicians from Ferriero’s old machine will soon control Bergen County unchallenged; for the sake of taxpayers living in our state’s most populous county, let’s hope Bergen Republicans can put provincial B.S. aside and once again take advantage of Joe Ferriero to get everyone rowing in the same direction. They can use this news story to remind voters of the good reasons why they threw the Democrats out to begin with just a short time ago.

But in order to do that effectively, the GOP elites need to stop savaging each other for 5 minutes.

4 thoughts on “Joe’s Way: the Sequel”