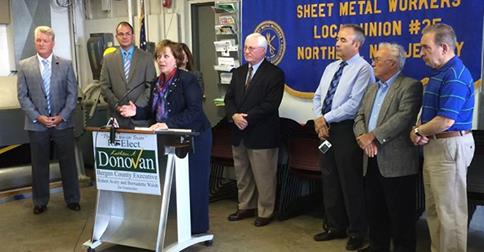 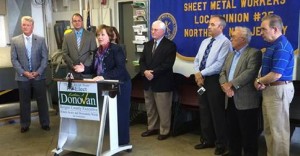 $200 million in savings over four years.

That’s the number Bergen’s Kathe Donovan, the incumbent County Executive in New Jersey’s most populous county, chose to focus upon in her formal campaign kickoff with decision day looming under 8 weeks into the future; spending reductions (the Europeans call it “austerity”) have been featured as a consistent theme throughout the campaign thus far.

“When I was fortunate enough to first be elected County Executive, I inherited a bloated, wasteful and inefficient government that was far more interested in self-service than public service and I am happy to say we have turned all of that around,” Donovan told a crowd assembled outside of the Sheet Metal Workers Union. “I am proud to say we have kept every single promise to the taxpayers, working families, seniors, children and young adults of Bergen County.”

Her bench of supporters is labor-heavy. In addition to members of the Sheet Metal Workers Union Local 25, she was flanked by representatives from the International Union of Bricklayers & Allied Craft Workers Administrative District Council. Their total strength in terms of membership comes in around 13,000 across the Garden State. The New Jersey Laborers previously backed the reelection effort with roughly 3,000 members from the Building Laborers Local 3 and another 8,000 members affiliated with the General and Heavy Construction Laborers Local 472, all based in the Northern New Jersey region.

Donovan is hoping they’ll give her a lift on Election Day, or at least cut into her Democrat opponents’ natural advantage.

“I am thrilled to have the support of these organized labor unions that have not only recognized our efforts to reform Bergen County Government, but who have also been on the receiving end of the economic benefits our policies and initiatives have created,” she added to the sound of applause.