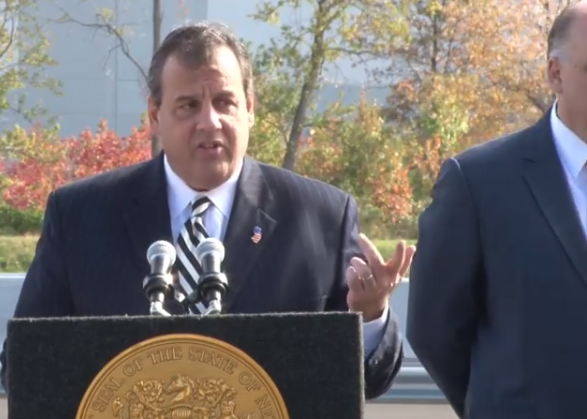 Governor Chris Christie declined to answer direct questions about the Transportation Trust Fund and a proposed gas tax hike, Save Jerseyans, other than to say that Trenton is working it out, as he stood side-by-side with Senate President Steve Sweeney and DOT’s Jamie Fox on Friday, cars whizzing by the Molly Pitcher Service Area at high speeds (and with a few honks) to celebrate the ceremonial opening of six new lanes between exits 6 and 9.

More on that later.

The cost of the $7 billion Turnpike capital improvement program (which looks pretty nice, by the way, and just in time for holiday shopping) was funded by a less-than-nice 53% Turnpike toll hike and a 50% Garden State Parkway toll hike…

Governor Christie: Imagine that 62 years ago, this road behind me started as a four-lane road that was 118 miles long.  And now today it is significantly longer and significantly wider because of this and is helping people – not only of the state of New Jersey who use it every day for commuting to work but also for the tens of millions of people who travel this corridor to be able to conduct their business and their personal affairs and use the New Jersey Turnpike to do that. As far as this extension, holiday travelers know better than anyone how badly this corridor backed up on the busiest days of the year. As a parent of college students, I know the Wednesday before Thanksgiving what this used to look like and which I suspect and hope now it will not look like. Average backups in the corridor during that day were ten miles southbound and thirteen miles northbound. Drivers this year can look forward to the first Thanksgiving in decades where they’re not going to have those kind of delays. Now as we go forward I think we need to use this as a model. We have a lot of other challenges that we have to face. We have to figure out together how to build roadways more cheaply. We need to make sure that we do them in a way that not only serves our long-term interests but also serves the interests of the tollpayers and taxpayers who are funding these type of projects. I also want to make sure that I give the appropriate respect and recognition to my two predecessors, Governor Codey who originally started the idea for this project and Governor Corzine who initiated the project. You know, it’s always difficult when you’re Governor. You start long-term projects and you know that you’re probably not going to be there to see them at the end and someone else will. And so as the someone else who is here when it ends, I want to make sure that both of those gentlemen get the recognition that they deserve for having stepped forward and put the idea forward and also got the project started and initiated. I also want to thank our two former commissioners who are here today and my former commissioner Jim Simpson for his role in making sure that this got completed the way it did and I look forward to working together with folks on both sides of the aisle to confront the transportation challenges that we have in our state and also to take advantage of the opportunities that will present themselves for us as well.