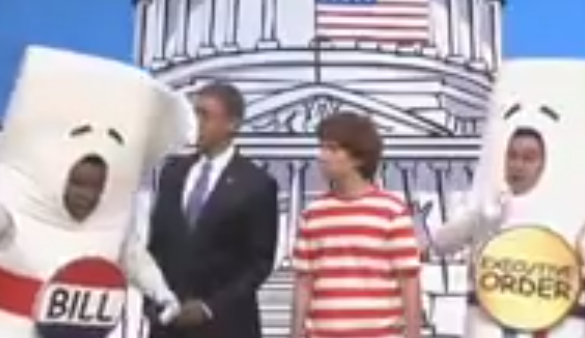 It’s not easy to ditch an idol, Save Jerseyans, and it’s even more difficult to call one out, but the Leftists who drive our culture are rapidly falling out of love with the president that once inspired messianic levels of affection in them. Big time, especially after he blew their hold on the Senate earlier this month. And they’re externalizing it for the first time.

Also evidence of something deeper and more significant at work?

Consider how Saturday Night Live turned on Obama this week, spoofing Schoolhouse Rock (a series that is remembered and loved by Generation X’ers, millennials and their parents) by featuring a “Bill” being violently thrown down the stairs by Barack Obama who, coldly, introduces his new best friend, “Executive Order” to a civics-curious youth:

Don’t get too excited. Entertainment industry liberals aren’t going to lose their religion just because one messiah didn’t pan out.

What’s significant here is the extent to which this particular president’s “coolness” (for lack of a better word) is wearing thin as he gets more desperate and hypocritical in the eyes of the faithful. No one likes a loser regardless of any other considerations, political or otherwise. The prom king was fun when he was all potential. Now he’s the guy who launched illegal wars, drone strikes and a fantastically terrible health care website. How… unhip. Especially in the eyes of a tech-savvy generation that grew up launching drone strikes in video games.

But it goes deeper. If you’ve been paying attention, you know the ideological center of our country’s youth isn’t really liberal at the moment. It’s libertarian-ish. A subtle but huge distinction that’s starting to reflect itself in popular entertainment as it already has in social media.

Think about it: all of the edgiest Hollywood types aren’t 60s liberals anymore; they range from “anarchists” like Woody Harrelson or unapologetically God-fearing (and nuder bongo drum-playing?) free spirits like his True Detective co-star, Matthew McConaughey. Elizabeth Warren only excites the far-Left and older hippies. Rand Paul may be a long-shot for the GOP nomination next time around, true enough, but no serious Republican tactician denies the need to energize his faction of the party.

Hilldawg’s early dominance of the Dem field is another opportunity to challenge the Left’s ownership of the cool caucus. Seriously – she makes John McCain look like Channing Tatum. Let’s not blow this. Republicans need to capitalize on these trends in 2016 by nominating a candidate who doesn’t only articulate our core principles but also exhibits the ability to step into the cultural vacuum created by Obama’s imploding celebrity star.