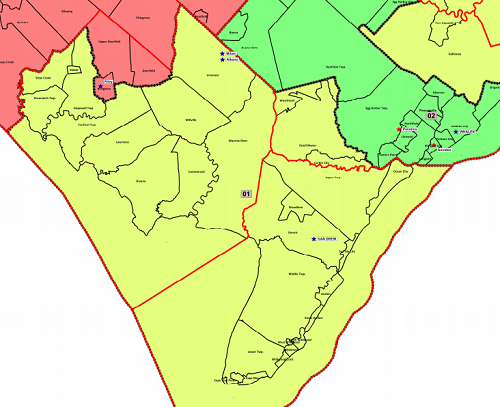 One down. Two to go?

The First Legislative District has been a top “target” for both parties going on a decade, but for a period of several years beginning with Election 2007, Republicans were unable to crack a 3-0 Democrat dominated delegation led by Cape May County’s Jeff Van Drew, a Norcross Machine lieutenant with strong ties to the Christie Administration.

That changed in 2013 when Cumberland County’s Sam Fiocchi achieved a break through and retired the ethically-challenged Nelson Albano. 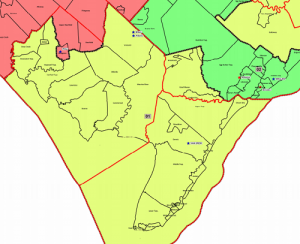 This year, as first reported here at Save Jersey, Republicans are turning to Cumberland Freeholder Jim Sauro to retire two-term incumbent Bob Andrzejczak in a low-turnout cycle and, if all goes according to plan, out the GOP in a stronger position to take on Van Drew in 2017.

“Two years ago, we broke through a decade-long Democrat monopoly in this district with Sam’s victory, and this year we are going to complete the job,” said Donohue, himself a former LD1 Assembly candidate, in a statement released jointly by the three LD1 GOP chairmen. “Assemblyman Fiocchi and Freeholder Sauro have grown their own local businesses, created good-paying jobs for local residents, and understand what it takes to get South Jersey’s economy competitive again.  They will advocate for conservative solutions to make our communities more affordable for families, seniors and young adults, and more attractive to entrepreneurs and small business owners looking for a place to settle and grow their business.  Our grassroots are energized and ready to work.  The Democrats will throw millions in special interest money at this race, but superior candidates and a clear message will win the day in November.”

Republicans are also hoping that a strong performance by the Assembly slate (which tops the ballot this year for the first time in many years) will produce gains in county and local races, particularly in blue-ish Cumberland where Democrats continue to control county government but Republicans continue to offer strong challenges in region that’s increasingly influenced by a growing Hispanic electorate (around 17% of the total LD1 population as of 2010).

“Last year, we defied the odds and took 2 of 3 Freeholder seats, and this year we are looking to build on that success,” added Testa, the junior of the three LD1 chairmen who succeeded Bob Greco in 2014. “Sam and Jim both have deep roots in Cumberland County, and a proven record of results.  Sam fought to reduce taxes and spending as a Freeholder, and has brought common sense conservative principles to Trenton – something we haven’t had in this district in a long time.  Jim Sauro is the hardest-working, most honest guy you could meet.  He shoots straight and doesn’t hold back; that’s exactly the kind of no-nonsense, truth-telling that voters want from people running for public office today.  Jim is as authentic as it gets.  This is a dynamite ticket and the Cumberland County GOP is ready to roll up our sleeves and sweep the Assembly race this fall.”

“We have an incredibly strong ticket in Atlantic County this year and we are expecting big things – including a Republican sweep in both the 1st and 2nd Legislative Districts,” concluded Davis, whose county has three towns – Corbin City, Estell Manor City and Weymouth Township – in LD1.  “Assemblyman Fiocchi and Freeholder Sauro represent a strong combination of private sector know-how and government experience that their opponents simply cannot match.”