O’Scanlon: When pumping gas, DON’T SET YOURSELF ON FIRE 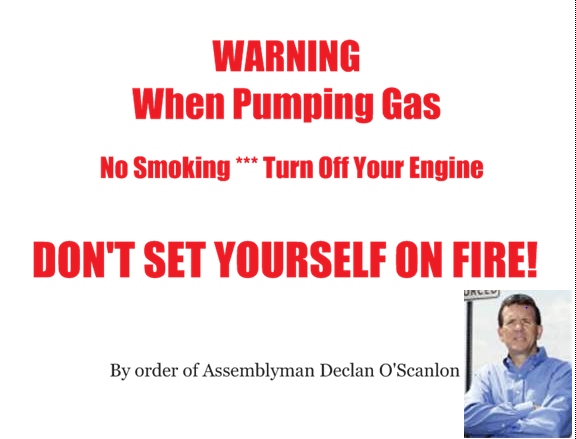 Assemblyman Declan O’Scanlon is offended by the argument that New Jerseyans are not capable of pumping their own gas without setting themselves on fire.  But in order to get his legislation that would decriminalize consumer gas pumping passed he in inserting language into the bill that would require signs on gas pumps for the protection of the mentally challenged and members of the Jersey City Council. 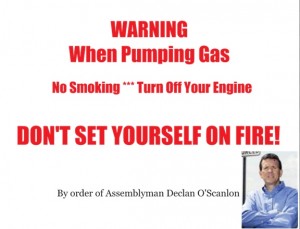 “I am offended by people that argue that New Jerseyans are mentally incapable of pumping their own gas without setting themselves on fire. But I hear them.  For that reason I am recommending language be inserted in the final bill that mandates signs at all self serve pumps, in bold red and blue flashing neon lettering, that reads “Do not, UNDER ANY CIRCUMSTANCES, set yourself on fire!!”   I think that should resolve these concerns” O’Scanlon said when introducing the legislation.

O’Scanlon’s bill, which mirrors a bill in the Senate sponsored by Bergen County Senators Paul Sarlo and Gerald Cardinale, except for the signage language, would decriminalize gas pumping by consumers and provide for self-service islands at New Jersey gas stations. Each facility would be required to operate at least one island full service for three years following enactment, and the bill also allows for gas retailers to charge a lesser price for self-service gasoline.

END_OF_DOCUMENT_TOKEN_TO_BE_REPLACED

9 thoughts on “O’Scanlon: When pumping gas, DON’T SET YOURSELF ON FIRE”