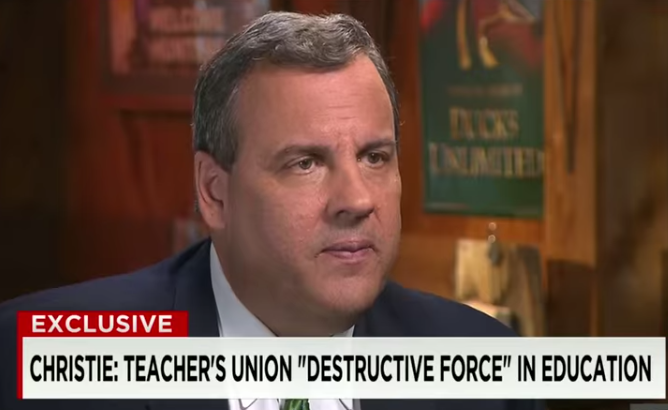 “The single most destructive force in public education in America.”

Sounding more like his old self, Save Jerseyans, that’s how Chris Christie described America’s national teaching union establishment this Sunday morning in a CNN interview conducted by Jake Tapper:

The NJEA promptly fired back by calling their state’s leader an “embarrassment” to New Jersey.

“Chris Christie has no credibility as a leader and he is an embarrassment to New Jersey,” said NJEA President Wendell Steinhauer in a released statement. “Our citizens deserve so much better. Even worse, he is a terrible role model to the children that our members work so hard to protect, nurture and educate.”

Protestations deprived of facts are cheap. There’s a mountain of evidence to back up the Governor’s assessment even if you don’t agree with the “punch” part (or his own chosen solutions, like PARCC); we even have these people on tape admitting they couldn’t care less about school quality when it conflicts with the union’s best interests.

Tell me which is more embarrassing: A crudely-crafted statement of truth? Or a crime shrouded in a velvet lie?

We’ll see if the Governor can make hay of this particular issue in Thursday’s upcoming prime time debate (his participation in which these comments were undoubtedly calculated to help shore up).

25 thoughts on “Christie on CNN: National teachers’ union deserves “punch in the face””