If you’re about 18 years old or older you probably remember where you were and what you were doing on September 11, 2001.

First, it’s fair to say that the eerie nature of the date itself (9-11) didn’t occur to most of us until after the fact.

I was sitting in my office at the Philadelphia Bar Association when it all began.

It was a beautiful, sunny September day — a day with a blue, blue sky and perfect temperatures.

As was my custom, I was at work relatively early and in front of my computer surveying the day’s news and my e-mails. In short, I was doing what a good public relations practitioner is supposed to do: keep up with the news and media developments, look for opportunities to make news and prepare for the day ahead.

When I saw the first story of a plane going into one of the twin towers in New York my first impression was that it was an accident. I thought it might be a small personal aircraft or something similar.

I also thought that it might be some sort of prank or trick.

I didn’t imagine that it would be a major commercial airliner.

But within a matter of moments, as the details of the story began to appear on the computer, I knew this was no accident.

Almost immediately (because of previous strikes on the World Trade Center) my thoughts went to a terrorist attack. And I concluded: Our nation is under attack.

And then, almost just as quickly, I found myself saying “We are at war.”

I couldn’t believe that I was saying these words but they nonetheless held an immediate truth.

I didn’t know who we were at war with. But I knew we were at war. Because I quickly began to comprehend that, as an attack on our nation this would be right up there with Pearl Harbor. And that meant war. Someone — some group or some nation — would have to pay for this.

As the horrific series of events began to be reported, a feeling of numbness set in. Not a protective or a self-imposed numbness. No, not that. But rather a type of sustained shock and the numbness that comes with it. It was like a body blow. A sucker punch.

This was a direct physical and emotional assault.

And so, as sunny and pleasant as the day remained, events began to unfold in a sort of black and white environment and we began to find ourselves moving through the day both warily and wearily as spectators in an unfamiliar new world — stormy and more ominous.

Offices were closed, workers were sent home and the city began to effectively shut down.

Our offices were just a few blocks from Independence Hall and other national shrines and I thought they might be targets as well.

So, I did not hesitate (once the opportunity arrived) to “get out of Dodge.”

But what was really happening and where would it end and how would anyone be safe? We didn’t know.

Yes, I did find myself going home the same way that I arrived (on public transit) but now the turnstiles were all open. We didn’t need fares or tickets. We simply walked through the turnstiles and onto the nearest transit car. And plenty of cars were waiting.

I remember that a young man sat down next to me on the train and he asked “What’s going to happen.”

I told him the same thing that I had already told my own son and daughter. “I don’t know,” I said. ‘I just don’t know.” 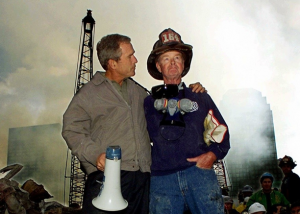 I told this young man that he and all of us should pray for the President because “He’s going to have to make some quick decisions. He faces a very heavy task; a tremendous burden.”

When I got back to my home in the suburbs yellow school buses were beginning to drop children off early and parents were waiting.

Neighbors stood outside in groups chatting with one another quietly.

And so began the pressing realization that we would be living through dark days — days of tears and grief.

I cried a lot. And so did my friends, neighbors and co-workers.

We assumed the burden of a collective national tragedy. But it was more than that. We felt the immense weight of an outrageous atrocity — an unspeakable act of evil committed against all of us because any one of us could have died the same way. Any one of us could have been the victims of this cold, calculated, multi-targeting attack.

And we began to feel anger as well.

Waves of emotion overcame us: sorrow, fear, anger, grief. But there was patriotism and pride, too. And those helped to hold us together.

We bore witness to all of it.

As difficult as it may be, we must tell the truth about what happened and why it happened.

In their name, we must not flinch.

For we honor them by bearing witness to evil and hatred and senseless mass murder and we strengthen ourselves as well in the resolve that it will never happen again. Never.