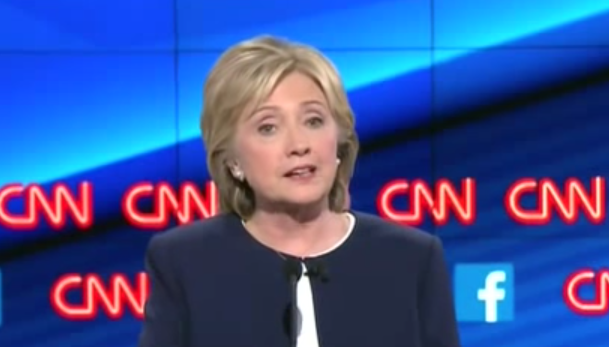 Last night’s CNN-Facebook-sponsored debate among Democratic presidential candidates was, as the late Yogi Berra said, “Déjà vu all over again.” Soap opera-like in its plot line, you could have watched any previous debate from any previous election cycle, skipped a few in between and then watched this one and you would have been able to pick up the story in nothing flat. The only thing you might notice is that this election season’s episodes are clearly much further down the far-left lane of whatever Yellow Brick Road these people travel.

The level of public interest in what the Democrats are up to would have resulted in it being cancelled had it been a regular TV show. But the show, we’re told, must go on nevertheless because hard-core political wonks and junkies must have their fix.

Missing from the debate despite plaintive entreaties from CNN was undeclared candidate, Vice President Joe Biden, the political Hamlet of our time – “To be, or not to be…” The network even schlepped an extra podium to the Wynn Casino in Vegas, the locus of the affair, just in case he showed up. Given how it went, he was wise to stay away.

While debate moderator Anderson Cooper didn’t toss softballs to anyone, a notable distinction between this debate and the two previous GOP debates was the absence of any attempt to pick fights among and between candidates. The Republican primary herd is contentious enough on its own, and brawls between them are mostly self-generated, but they are entertaining and make for great TV. The Democrats, not so much.

In other words, their debate resulted in a very predictable and very, very dull affair. That’s great for candidates looking to not make waves, but terrible because I’m guessing a LOT of viewers looked for something else to watch not long after it started.

While each of the candidates tried to be respectful and tiptoe around former Secretary of State Hillary Clinton’s considerable baggage, the first shot fired was by the otherwise indecipherable and Quixotic former Rhode Island Gov. Lincoln Chafee when he introduced himself more or less as a very clean old man (think Paul McCartney’s uncle in A Hard Day’s Night) with no history of scandals and “high ethical standards.”

Similar oblique shots were taken all evening, especially when it came to the dynasty issue where Hillary Clinton, in her best pretzel mode, sought to twist herself out of being the consummate insider and member of an elite and entitled political family, into the only real outsider among candidates of either party because she’s a woman, which begs a question about Republican candidate and former Hewlett-Packard CEO Carly Fiorina: What’s she – a potted palm?

Vermont Sen. Bernie Sanders did, in a gallant and Sir Walter Raleigh-like way, leap to Hillary’s defense on the ongoing State Department email scandal by insisting that “people are sick and tired about hearing about (her) damn emails.” People other than most major media outlets covering the story, Congress, the FBI, the State Department itself and the millions of Americans who now regard her as untrustworthy  as a result.

Sanders was skewered himself on his self-confessed status as a “democratic socialist,” which he tried half-heartedly to explain as consistent with long-standing, Main Street values of fair play and support for the little guy. But it came across more like trying to explain that you were there to save their souls when you got caught by the police naked in a brothel. That’s your story, and you’re sticking to it?

Throughout the night everyone of the five assembled presidential aspirants, Clinton, Sanders, Chafee, former Maryland Gov. Martin O’Malley and former Virginia Sen. Jim Webb, sought to outdo each other in offering free stuff to the American people and to illegal immigrants. Whether it was free college, free Obamacare for illegals, free paid family leave, you name it and, if elected, it will be yours and paid for by those evilbadnasty successful people in America who are evilbadnasty and never do anything in the evilbadnasty banks or on evilbadnasty Wall Street that isn’t evilbadnasty.

Bernie Sanders especially flogged that bloody shirt much like your mother’s uncle who comes to Thanksgiving dinner and monopolizes the conversation with his conspiracy theories and stories about how “they,” whoever “they” are, are out to get him. With Bernie, however, the “they” are clearly anyone who has ever been successful in business and the always-evilbadnasty Republican Party, which he spared no occasion to describe as evilbadnasty.

Similar one-upmanship was displayed on climate change, guns and gun control and more and more government spending. But not a word, nor a question asked, dealt with growing the economy, the role of the private sector in job creation and support for American business. It was as if all things come from government, government is all that matters and without massive, free-stuff-giving government the American people would be hopeless, helpless and hapless.

When asked how she would pay for a paid family leave program, Hillary Clinton tore into the tired meme of the Republican war on women. Bernie Sanders blamed “right-wing Republicans” for standing in the way of the government making all your dreams come true through free government stuff.

On climate change, Martin O’Malley sounded less like a presidential candidate and more like a candidate for spiritual enlightenment guru. I actually wondered for a moment whether he was stoned, he sounded so Timothy Leary-like.

Only Jim Webb stood up for traditional fossil-fuel energy sources and for coal, and he was roundly bet up by the others on account of it. To them, it’s total solar and wind or nothing. Exactly how this massive transition will impact the American economy was never touched upon.

After a time, the underlying question was “is there no tar…Are there no feathers?”

A few juxtapositions of Clinton’s are worth noting: In one canned response, she mentioned how the country is on a precipice of economic calamity much like it was in 1929, but then she said the economy thrives only when Democrats run things. Uh…like, the guy in charge for the past seven years, which would count as a run up to today’s 1929-like mess – isn’t he a Democrat?

In a moment of extreme irony, Hillary Clinton insisted that Edward Snowden needed to be held legally accountable for what she regarded as his mishandling of classified documents. Look for this refrain to come back to haunt her.

On the Keystone XL pipeline, she proudly proclaimed how she took no position until she took a position, which is reminiscent of another former secretary of state’s famous “I was for it before I was against it” line.

The oddball lines of the night came from Chafee who sought to explain away several votes he took in the U.S. Senate as ill-informed and the result of him being the new kid on the block. Candor is one thing, but confessed cluelessness knocks you out of even the Democrats’ box.

Sanders fell all over himself trying to give President Obama’s Syria non-policy policy cover by insisting that Russian President Vladimir Putin is behind an eight-ball and regretting his moves into Ukraine and support for the Assad regime in Syria. The other candidates nodded their heads in uh-huh agreement, but no word on how Putin doesn’t care what Sanders or even President Obama, for that matter, thinks about everything, even climate change, which so many of them regarded as a greater threat to national security than Putin’s new Cold War and challenges to American leadership. Ugly stuff.

One of Anderson Cooper’s closing questions asked each to name who they regard as an enemy. While the other four answered in as expected – all the evilbadnasty people, especially evilbadnasty Republicans, heretofore mentioned – Jim Webb wryly remarked it was a North Vietnamese soldier who threw a grenade at him, but who is no longer with us to comment on the matter.

While Democrats might be horrified, many others must have said, “cha-CHING!” and pumped their fists. Finally, an old-fashioned American response to a question.

But enough already – time for winner and loser awards:

Winning by not showing up goes to Vice President Biden. Nothing changed, there were no breakouts, previously held biases were confirmed, so there’s still time to announce. Besides, he never does well at the blackjack tables in Vegas.

Winning by playing both ends against the middle goes to Hillary Clinton. What you’ve seen before, you saw again, including taking mutually exclusive positions on issues and being all things to all people at the same time. No major gaffes, but there was that horrendous cackle when Bernie Sanders gave her cover on the email scandal, and that was annoying. Nice hair, though.

Winning sort-of by affirming his base with red meat against the evilbadnasty people goes to Bernie Sanders who, unless you love the bejeebers out of him, comes across as an angry and hate-filled old man – “Get the hell off my lawn” – out to demolish and destroy an evilbadnasty white whale.

Losing by being clueless not only about Senate votes but about everything under the sun goes to Lincoln Chafee who embarrassed himself nearly as badly as Junior Soprano did when he wet his pants telling a joke in the mental hospital to which he was confined.

Losing by forgetting how everyone in America lays the blame for the Baltimore riots at his feet goes to Martin O’Malley who tried to shake his horrible record as governor with paeans to himself and his evangelical insights into how to fix climate change that even Sanders derided as delusional.

Winning but only if he was running in the Republican field but otherwise hated by progressives goes to Jim Webb who, despite an overly wonky style at times, said things that made sense , like when he came out and affirmed the right of Americans to carry firearms for self-defense since the big shots in the country are always accompanied by armed guards. Take THAT Secret Service-protected Hillary Clinton.

It took a 1.75 litre bottle of Pepto-Bismol and downing Prozac like M&Ms to get through three hours of the debate and accompanying hype, but I did it so you wouldn’t have to. One of the many services I offer.