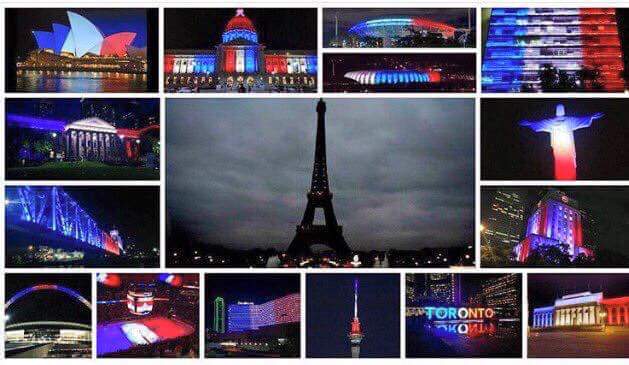 Are you flying the French flag?

Have you changed your Facebook identity so that the flag is superimposed over your photo? Or maybe you’re depicting the Eiffel Tower to show your solidarity with France.

Since buildings and bridges and other edifices are bathed in blue, white and red you want to show your allegiance during this time as well.

And admirable, sort of.

But, if that’s all you’re doing, you’re taking the easy way out in the face of unspeakable horror. And, in fact you may also be trivializing the greatest challenge now faced by the civilized world — a massive, dastardly, unspeakable stream of evil that is now already more than 40 years old and more violent and threatening today than ever before.

Maybe you’ve been weeping as well, huh? OK, it’s hard not to cry when you see what happened and realize the scope of this atrocious act of barbarism.

And here are a few other things you can do:

2) Understand the history and nature and scope of this beast. Study it and know what we’re up against. Take the time to know what you’re talking about. Get clear-headed, be real and be prepared.

3) Take on those who would minimize or even attempt to dismiss the threat we’re facing. Armed with the facts, answer them and make sure their twisted logic is exposed for everyone to see. Above all, do not be intimidated by them.

4) Don’t hesitate to be outraged. Broker no soft-pedaling in the face of this genocidal madness. Demand to know exactly where each and every elected official stands on the threat of radical Islam. Put them on the spot. Hold them to account.

5) Pay attention, speak up, ask questions, step into the breach. Don’t wait for someone else to make these moves. You be the one!

6) Get some guts. Shake everyone you know out of their complacency or apathy as well. Inform others; push them to take a stand.

7) Support our military in any way you can. Donate to the USO or similar organizations. Send cards and gifts to those who serve. Thank them publicly and privately every chance you get. Announce your support, show it and encourage others to do the same.

8) Show the same support for our first responders. Do the same for them.

9) Very simply, keep your eyes and ears open at all times. Pay attention! If you see something, say something.

10) Grow up. You have a duty and a responsibility. Turn this anguish into action. Set an example for your children and grandchildren, for your friends and neighbors and for all other citizens. This isn’t a mere “Hallmark card moment” — this is a critical hour, a critical moment in the history of the civilized world. This is more important than anything else right now. Act like it.

Oh, and one more thing — forget about political correctness. The time is now too late and the stakes are far too high to worry about offending some person’s (or some group’s) feelings.

2 thoughts on “Flying the French Flag? That’s fine, but…”