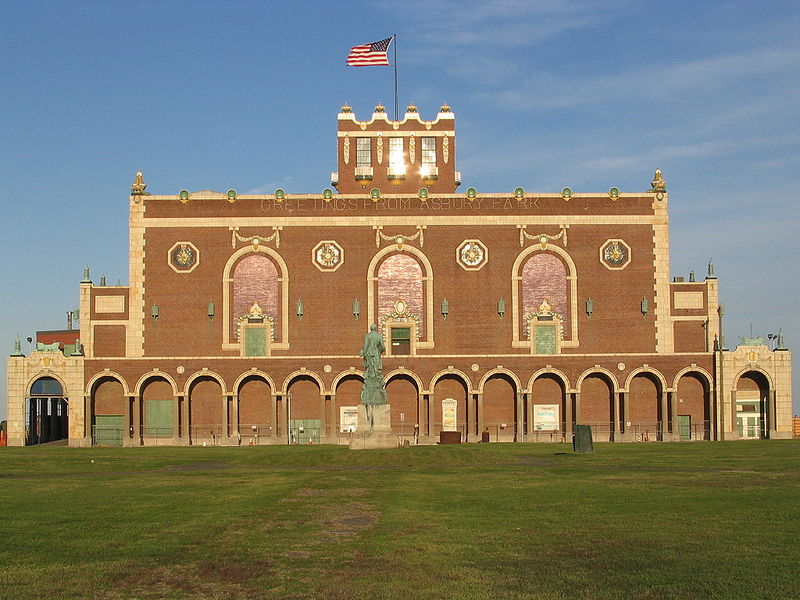 By Tommy De Seno | The Save Jersey Blog

With ISIS committing acts of terror on 4 continents, and President Obama importing refugees from their home territory, now is a bad time to offer interest-free Sharia Law mortgages in America, but that’s exactly what one company is doing.

The beach town of Asbury Park, New Jersey has undergone a slow-grinding redevelopment for the better part of 30 years.   Bereft of money in 2007, the city sold millions of dollars worth of storied boardwalk buildings including Convention Hall to a private company — Madison Marquette.  Madison Marquette also owns concert venues near the boardwalk like the famed Stone Pony.  They are positioned in expensive retail properties across America in California, Ohio, Washington, D.C., Florida and more.

What few know is that Madison Marquette is owned by an Islamic company rooted in the Middle East; a company whose other subsidiary specializes in “Sharia Law Compliance” and lures Sharia-following Muslims to 23 states with interest-free home mortgages.

The parent company is Capital Guidance Corporation, whose managing director Amer Hammour is also CEO of Madison Marquette.  Hammour was born in Syria and educated in Lebanon, France and the U.S.  Another wholly-owned subsidiary named Guidance Financial Group, run by Mohamad Hammour with help from Amer Hammour, was formed to enter the burgeoning “Islamic Financial Market.”  Capital Guidance states its “main vehicle” for doing business in the U.S. is Madison Marquette, and controls $5 billion in assets.

Guidance Financial maintains a “Shariah Supervisory Board.”  This board counsels in financial matters to ensure compliance with the controversial Muslim value system known as “Sharia.”

For the uninitiated, Sharia is a set of Islamic laws dating back to the 7th century, still used in whole or in part in Muslim countries like Saudi Arabia, Sudan and Yemen.  Sharia contains the notoriously brutal social and penal rules that Al Qaeda, ISIS, Boko Haram and other terrorists wish to impose on the West, including America.

Under Sharia, women are chattel of men, and if convicted of adultery are stoned to death [Warning: Graphic], can be punished if raped, suffer “honor killings” and  “female genital mutilation.”  Homosexuality is punishable by death by stoning or dropping them from great heights.  Stealing is punished by having a hand chopped off  [Warning: Graphic] while apostasy and blasphemy will get youbeheaded.

Sharia also has strict business rules rooted in religious texts like the Koran and Hadith. For instance, it is prohibited to charge or pay interest, which they call riba.  Sharia compliance is so complex that barely 100 Islamic scholars are recognized to opine on it, and they have set up a profitable cottage industry as “Sharia compliance advisors,” including in America.  Guidance Financial is a world leader in this area.

Guidance Financial’s “Sharia Supervisory Board” is chaired by Sheik Muhammad Taqi Usmani, who sits on dozens of Shariah boards around the world.  Usmani is part of the Deobandi movement, whose madrassas inspired the creation of the Taliban in Afghanistan, and for whom Usmani tried to set up a Sharia banking system. In 2013 he issued a fatwa against the Pakistani government for assisting the U.S. in the fight against Afghan terrorists.

His support for the Taliban against the U.S. did not get him in as much hot water as when his book, “Islam and Modernity” was translated into English in 2006. It’s been reported Usmani was on the Sharia Board of the Dow Jones Islamic Fund Index, who cut ties with Usmani and scrubbed his name from their media materials after his radical writings were published.

In his book, a questioner asked Usmani if it was necessary to commit Jihad against a Western country, if Muslims were already free to practice and preach Islam there.

Usmani answered that the right to practice and preach Islam wasn’t good enough.  Muslims must break the “grandeur and domination” of non-believers in the West, as dominance gives a psychological advantage.  He then cited the Koran, thusly:

Here, killing is to continue until the unbelievers pay Jizyah [a Muslim tax on non-Muslims], after they are humbled or overpowered.  If the purpose of killing was only to acquire permission and freedom of preaching Islam, it would have said “until they allow for preaching Islam.”  But the obligation of Jizyah and along with it the mention of their subordination is a clear proof that the purpose is to smash their grandeur, so that the veils of the domination should be raised and people get a chance to think over the blessings of Islam.”

Usmani made two other points consequential to the West.  First, he said if Muslims do not posses the capability of “Jihad with Power” then agreements can be maintained “until power is attained.”  Second, he opined that imperialism by conquering other lands was a legitimate goal of Islam.

No wonder Dow Jones ended their relationship.  Capital Guidance has not. Usmani is still on Guidance Financial’s website as chair of their Sharia board and Usmani lists the same affiliation on his website.

Of course for Usmani’s idea of attack to work in America, he would first need to settle Muslims here who are devoutly committed to Sharia. Well…

Be introduced to another Guidance Financial project – Guidance Residential – which gives interest free Sharia-compliant mortgages to buy homes in 23 states, including New Jersey.  They are luring people who wish to follow Sharia and already closed 8,000 loans around the country.  Who is chair of the Shariah Board for Guidance Residential?   The same Sheik Usmani who advised Muslims to lay in wait and kill us.  Guidance Residential held training seminars for Imams in Berkeley California to school them in Sharia, using videos of Sheik Usmani.

President Obama sent Governor Chris Christie a letter telling him some of the 10,000 Syrian refugees he’s bringing to America will be in New Jersey.  Syrians culturally grew up with Islamic Law written into their Constitution (1973 and 2012 versions), and codified a  form of Sharia into a statute on marriage, divorce, inheritance, and custody.

Won’t Sharia compliant mortgages attract them if they do?

Not all Muslims follow Sharia, but all Islamic terrorists claim to. Filtering the good from the bad is hard, so Sharia mortgage applications should be a red flag.

We are all looking for possibilities of terrorists in America and 9/11 was a failure to connect the dots.

Our mantra now is, “If you see something, say something.”  So here is what needs to be said:

Asbury Park is a very diverse city where no one stands out.  If terrorists are looking for a place to lay in wait to commit jihad, as Sheik Usmani suggested they do, Asbury Park is now magnetized to attract them. An Islamic controlled company runs the beachfront and will help with a Sharia mortgage.

A perfect storm of jihadi possibility, even if the parent company and the local Madison Marquette office don’t intend it.

Are terrorists already here?  An ISIS terrorist supporter was arrested in Asbury Park in 2015.

What reliance shall we place on “screening” for terrorists?  The San Bernardino killer was screened but laid in wait. Jihadists have the advantage when hiding in a group as big as 10,000, as it only took 19 men to conduct the 9/11 attack, 8 in Paris, 2 in Boston and 1 at Fort Hood.

Discovering those laying in wait is hard and Sharia adherence may present the only clue the FBI and CIA can follow. They should.

With ISIS now committing a Christian genocide, complete with beheadings and crucifixions, even of children, this is no time to countenance an immigration policy that enables terrorists to infiltrate our country by gaming our screening process just so politicians can feel good about themselves. Let’s not attract them with interest free mortgages, either.