Christie’s Caucus Day: Rally with Branstad then N.H. by nightfall 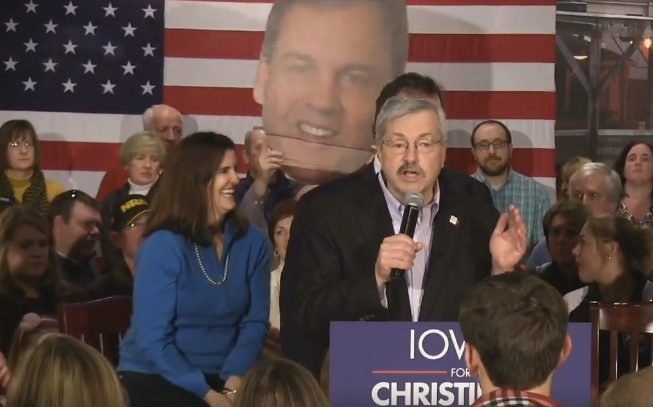 The end is nigh, Save Jerseyans. One way or another.

Averaging only 2.4% in the final round of Iowa Caucus polling, expectations for Governor Chris Christie‘s performance tonight are as flat as plowed-over corn. He’s unlikely to find his field of dreams in the Hawkeye State.

Team Christie is acting accordingly with a schedule reflective of where its true priorities still lie: 1,200 miles away in New Hampshire.

Projecting beyond the Midwest, the candidate joined Morning Joe and Good Morning America early Monday morning to discuss today’s events before attending the West Side Conservative Breakfast Club in Urbandale. Then he’s off to visit the Drake University Law Republicans with long-time ally Governor Terry Branstad at his side before a luncheon in Des Moines.

By 4:00 p.m. this afternoon? He’ll be back in the Granite State to resume an ambitious town hall bus tour which will include stops in Hopkinton, Nashua, Bedford, Epping, Manchester, Londonderry, Lebanon, Bow, Milford, Keene, Newport, Henniker, Dover, Stratham and Salem (deep breath!) encompassing twelve town halls spread over just five days. Former HP CEO Meg Whitman, a GOP fundraising powerhouse in her own right and former McCain campaign co-chair, will even join the procession for the first three days.

Still, a lack of competitive potential in his own state didn’t stop the popular Branstad from stumping for Christie on Sunday night, too, at a rally at Wellman’s Pub & Rooftop in West Des Moines. The fellow state-level chief executive focused on Christie’s record, not as a governor but as RGA chairman. 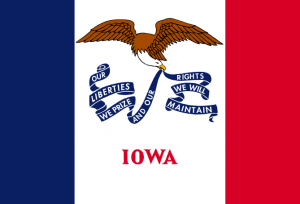 “And when he became chair of the Republican Governors Association, I met with him and I said, ‘Governor Christie, help us early. You won’t have to worry about us late,'” Branstad told the assembled crowd. “And he did. And he did. And not only did he help us, he helped all these other incumbent Republican governors that won in 2010 that were up for reelection. I mean, tough states like, Michigan and Wisconsin and South Carolina and Florida. But he not only helped us win those reelections by providing financial support and personally campaigning for those Republican candidates, he helped us pick up states that nobody thought we could win, like Illinois and Massachusetts and Maryland.”

Could Branstad’s confidence see any validation next week in New England? We’ll know soon enough. Christie’s polling there isn’t a ton better, placing him in 5th or 6th place with little more than a week left to go before America’s first proper primary election of 2016. Anything less than a top 3 finish – something that would “defy expectations” – could send Christie home.

4 thoughts on “Christie’s Caucus Day: Rally with Branstad then N.H. by nightfall”