By Bill Spadea | The Daily Point

This week two things happened that demonstrate without new leadership in Trenton our state will become increasingly unaffordable.  And that’s saying a lot considering we are already one of the highest tax burdened states in the nation.

The Republican Governor and Democratic Senate President met and discussed how to fund the Transportation Trust Fund. The didn’t find a mutually agreeable solution, but they agreed on one thing… the gas tax should be raised by $0.23. 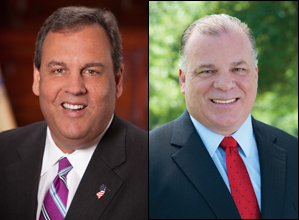 Then in another blow to commuters and residents, the leader of the Republicans in the NJ Assembly, Jon Bramnick embraced the hike in the gas tax as a “strategic necessity.”

In “Trenton Speak” the phases “Strategic Necessity” and “Tax Fairness” means YOU will pay more to live and work here.  A lot more.

The elected officials of the Republican Party in New Jersey repeatedly campaign on a message of lowering your tax burden and making New Jersey more affordable.  Now under the pressure from lobbyists, union leaders and Democrat legislators, they’ve completely changed course.  Put simply, in the name of what the Governor refers to as “Tax Fairness” they’ve decided that you are simply not paying enough.  Is there anyone in New Jersey so confident in the accountability of our government that they believe there is no where to cut?  Do we accept that the nearly $35 billion dollar budget is the most efficient plan for government?  How can we trust any politician in Trenton when even today the estimated cost per mile of road construction is between $183,000 and $27.5 million.  The only thing we know for certain is that no one in NJ government has any idea how much it will cost to rebuild and repair our aging roadways.  But they’re happy for you to suffer a little more pain in exchange for better roads.

What cowardice.  What weakness.  What ignorance.

But as you know, I’m an optimist.  There is some good news. There are a few brave souls left in Trenton on both sides of the aisle.  Senator Mike Doherty has repeatedly called for audits of road projects, cuts in spending on projects like “The American Dream”  and tax policies that would encourage job creating businesses to stay and relocate to NJ.  Senator Ray Lesniak, although a liberal Democrat who’s been vocal about higher taxes, is at least as outraged as I am over the lack of accountability.  Especially when it comes to projects like the Route 35 debacle.  He’s ready to grill the acting DOT commissioner to answer for the $27.5 million for each mile of the 12 and a half mile stretch.  It’s a good start.  And then there’s Senator Jennifer Beck.

Enter the newest champion of the taxpayer.  Beck and I spoke at length on the air this morning about where the budget can be cut.  She’s got a plan that would cut more than a billion dollars out of the state budget by reforming and changing the state worker health insurance plan.

She also agreed to have her staff review and dig deeper on the cuts proposed by Chaser Alex Zdan. He identified about $700 million that could be cut without a major impact on state services. 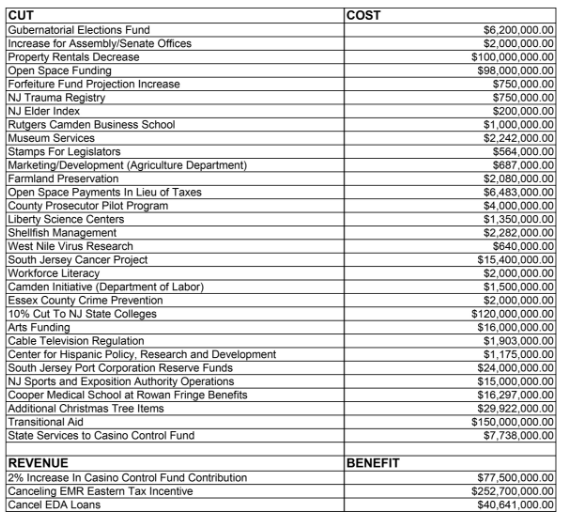 $2 million for Museum Services? $16 million for arts funding?  $98 million for additional open space funding?  More than a half mission for stamps?  All while the lobbyists and the unions are telling us our roads and bridges are in such disrepair we are facing imminent danger to life and our economy.

Has anyone in Trenton every prioritized a budget?

Senator Beck and I also discussed $24 million dollars in the current budget that goes to the South Jersey Port Corporation. According to Beck this is a thriving economic engine for our state.  I agree 100%!  But why are the taxpayers subsidizing something that could be managed by a private company sending tax revenue to the state instead of costing taxpayers millions?  We’ll save that discussion for phase two.

For today, Beck’s team will dive into the numbers and we’ll have actual line items that can be cut in order to prioritize and allocate critical funding for the Transportation Trust Fund.  Between the cuts and the changes to the state’s health plans, there is more than enough to offset the projected revenue of $1.3 billion from a new gas tax.  And we’ve already discussed that revenue from the current tax is dropping as millennials move to urban areas and technology makes cars more fuel efficient.  So the $1.3 billion is overstated from the beginning.

If we don’t cut spending and prioritize the budget immediately our economic outlook will continue to worsen. More businesses and families will leave along with pension recipients further draining the resources and increasing the burden of those of us who are #DigginIn.

We’ve got a plan.  The numbers add up. Your voice is being heard.  #NoGasTax.  Period.