There’s even a New Jersey angle that you may’ve missed.

The pair feature prominently in one particular email exchange from May 9, 2016 wherein DNC operatives appear to work (off-line) with representatives of N.J. State Senator Loretta Weinberg, perhaps Governor Chris Christie‘s most vocal critic in the legislature, and/or the N.J. Democrat establishment to attack the Republican shortly after he was named transition chairman for the Trump campaign.

“NJ Dems should call on him to resign,” Walker suggests, responding to another staffer circulating the Christie transition announcement. “Clearly no interest in doing anything for the people of New Jersey. 26 percent approval (2 points higher than Nixon when he left office) – he clearly does not have the consent of the governed.”

“I would have this come on her letterhead and then we forward it for maximum impact […] Looks out of whack to Jersey press corps if Weinberg statement is going out on our letterhead,” added TJ Helmstetter, Deputy Director of Regional/Specialty Media at DNC, further down the chain.

The context of the chain suggests Weinberg initially agreed to call for Christie’s resignation at the DNC’s prompting but later got cold feet. 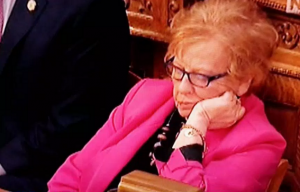 “Ok, new plan, Sen. Weinberg was uncomfortable with calling on Christie to resign this time, so new statement,” explains Wei to the group.

The thread concluded, however, with vocal griping over having “missed” the “window” to attack Christie as attempts at coordination with the N.J. Dems seemed to fall short of expectations.

What it really reveals? More of the DNC dysfunction that spilled into full view of the world during last week’s Philadelphia convention… and a self-described “independent feisty grandma” who comes out of this story looking more like a puppet.

“That’s fine, it’s just embarrassing when the DNC reacts to news 8 hours after it happens,” Helmstetter shot back at Wei who had offered to send research to the Weinberg/NJ Dem contacts. “If her office does something in the morning we should still amplify it but we look silly when we wait so long to respond to breaking news.”

The larger DNC email scandal, allegedly the result of a massive foreign hack, led to the downfall of DNC Chairwoman Debbie Wasserman Schultz.