Trump may be crazy but this Hillary video is downright terrifying

Regular Save Jersey readers know that I’m no fan of the Donald. In fact, given his and his campaign’s recent comments (and shady connections) to Putin’s Russia, it might be a toss-up as to which of the 2012 major nominees is a bigger risk on the foreign policy front.

Domestically? In case you missed it this week, here’s Hillary Clinton campaigning in Omaha, Nebraska with billionaire Warren Buffett by her side calling for raising taxes on the “middle class.”

“Because while Warren is standing up for a fairer tax code, Trump wants to cut taxes for the super-rich,” Clinton told the enthusiastic crowd. “Well, we’re not going there, my friends. I’m telling you, right now – we’re going to write fairer rules for the middle class and we are going to raise taxes on the middle class!” [Emphasis added.]

Yes, it might’ve been a case of mispoken-itis.

Still, when you’re dealing with a notorious master of factual misappropriation (read: liar) like Hillary Clinton, folks, sometimes you can only get to the truth when he/she slips up and gives the listener a moment of accidental honesty.

Consider how neither Clinton nor Buffett addressed the fact that approximately 45% of Americans do not currently pay federal income taxes.

This famous pair of limousine liberals also failed to mention how, back in 2014, somewhere in the neighborhood of 51-to-55% of total federal income taxes were paid by Americans earning $250,000 or more. 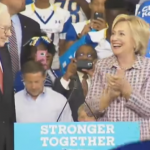 Another major omission? While most of her $498 billion in tax hikes would impact “rich people,” economists note the end result would be 311,000 fewer jobs and a 0.9% negative income hit for your average taxpayer.

One more: many individuals who own small businesses (and hire millions of Americans), categorized as owners of partnerships, sole proprietorships, and Subchapter S corporations, use their personal income tax as opposed to corporate income tax when filing their annual federal returns. Put more simply, the IRS’s method of reporting takes plenty of folks who aren’t really “rich” by any definition and clobbers them with disproportionately high tax burdens that make it harder to grow, expand and hire. 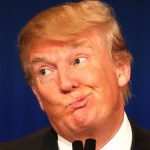 To review, Hillary Clinton is both (1) misidentifying the problem and (2) lying about the impact of her ‘solution’ on average Americans.

Like we discussed earlier in this post… it’s not the kind of thing we could’ve expected her to admit!

Careful research — or a verbal slip like the one we caught on tape in Nebraska — are where you need to look for the truth.

I’ll leave it to you to decide whether Trump’s rude and illiterate campaign (which includes the very real prospect of trade war!) is scarier than Hillary’s devastatingly anti-growth tax ideas.

Flip a coin? I’ve heard worse ideas this cycle, mostly from your two options for president.