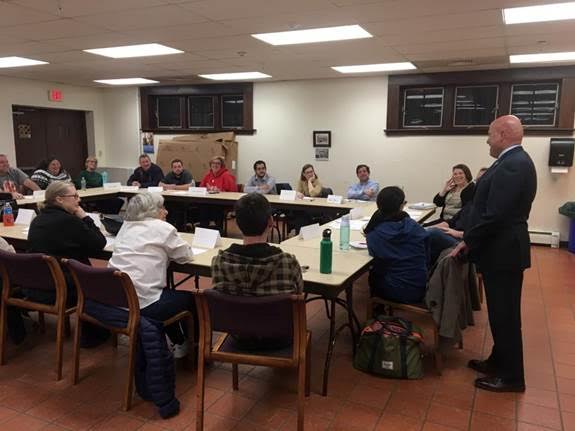 Republicans are facing angry (and professionally organized) protesters at town halls across the country this week, Save Jerseyans, working overtime to rescue Obamacare on the brink of repeal.

Some Republicans are wading into the mix by taking on the protesters directly. Others are skipping the hijacked town halls altogether. Why give Soros-backed groups a photo op, right?

On Tuesday night, for example, he unexpectedly showed up at a meeting of the Evesham Township Democratic Party and subsequently shared some thoughts about the experience on his Facebook page:

Last night, as I was leaving my office at the Gibson House in Marlton, I saw a sign near the door – “Evesham Democrats 7 – 8:30Downstairs”. I had just finished up a productive meeting with Action Together Burlington County – an organization that was respectfully protesting at my office just last week – and I wondered if the Evesham Democrats would mind if I stopped-by.

So, I walked in. Yes, a Republican Congressman dropping in to a meeting of local Democrats to talk with them about some very serious concerns they had. We didn’t yell or point fingers. We talked honestly and respectfully. We certainly disagreed in some areas, but we did it respectfully.

I genuinely cherish moments like these and I’m certain our country would be the better for it, if members of both parties – Republicans and Democrats alike – would commit ourselves to working together to make America the best it can be.

Neither party has a lock on good ideas and all should have their imprint on where we go as a nation. I am truly grateful for the opportunity to represent Burlington and Ocean Counties in the United States House of Representatives”

No yelling, signs, sloganeering or other nonsense. Just sober discussion.

To their credit, the Evesham Democrats were genuinely appreciative for the Congressman’s visit.

“We had the pleasure of appointing two new committee members last night, of Congressman MacArthur (R) surprising us with a visit and discussion,” the club Facebook page announced.

THIS is how it’s done, folks. Take notes.