Cory Booker Wants You to Forget the Past 8+ Years 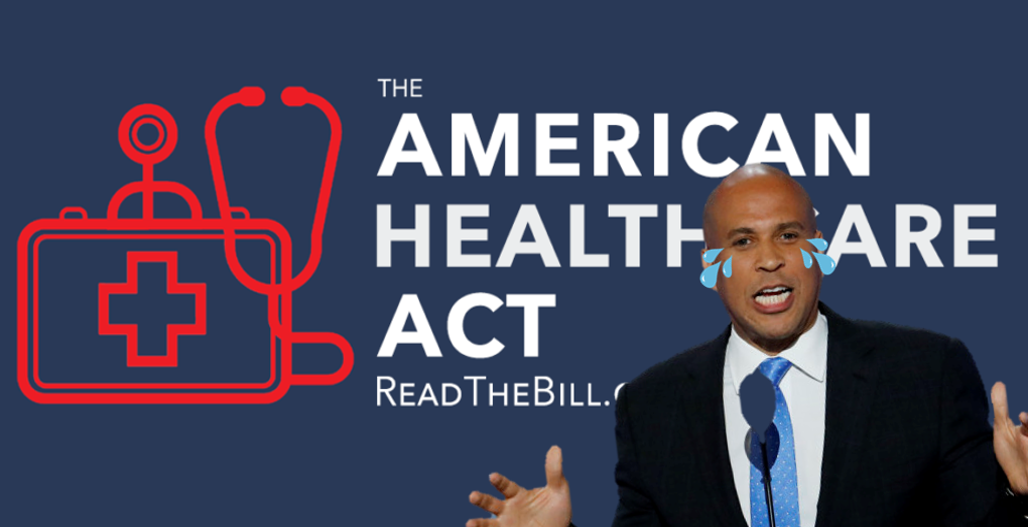 Our friend Senator Cory Booker (D-Twitter) has a short memory, Save Jerseyans. Over the weekend, Booker decried the American Healthcare Act, which is the new Republican plan to repeal and replace Obamacare, as “bad policy,” telling CNN’s Jake Tapper “The Republicans cannot just force this down our throats..”

Let’s all just stop and have a laugh at the glaring hypocrisy here.

It wasn’t all that long ago that Democrats actually forced the Affordable Care Act down everyone’s throats with haste and complete ambiguity, to which Booker and his colleagues raised absolutely no objection. In fact, Johnathan Gruber, one of the main architects of Obama Care, told us the ambiguity was by design:

Lack of transparency is a huge political advantage. Call it the stupidity of the American voter or whatever, but basically, that was really, really critical for the thing to pass.”

Contrast that strategy to what is currently taking place with the Republican proposal. It’s like night and day.

The GOP healthcare bill is out there for everyone to read. Predictably, it includes a lot of legalese that is not necessarily fun or easy to read for the average American, which is to be expected with just about any bill coming out of Washington D.C. However unlike the entirety of the Obamacare law, which was nearly 10,000 pages long, the GOP healthcare bill is actually short enough to read in a reasonable amount of time. You can read it here.

Back in 2010, then-House Majority Leader Nancy Pelosi could not even describe what was in the bill and made the outrageous claim that “We have to pass the bill so that you can find out what is in it.” Fast forward to today where the American Healthcare Act is receiving wall-to-wall media coverage with detailed analysis and scrutiny from pundits and politicians alike.

When it was first unveiled, Speaker Paul Ryan give a 20 minute overview of the bill and has since been tirelessly out on the road explaining and defending the details of his proposal:

Booker also lamented to Jake Tapper how instead of trying to work with Democrats to “fix” Obamacare, Republicans are attempting to scrap it altogether. He said, “That would be great if they were coming with an open heart to say, ‘Hey, this is not perfect, let’s fix it. What we’re saying as the Democratic Party is, let’s build upon it. Let’s fix it.”

This is particularity laughable.

First, despite acknowledging that Obamacare is not perfect (something we’ve known now for years),  neither Cory Booker or any of his Democrat colleagues have made any effort to fix it themselves. Instead? They complained for months that the Republicans didn’t have a suitable replacement plan and are now committed to tearing down any effort by Republicans to get rid of it.

Also remember, Save Jerseyans: Democrats passed their sweeping healthcare overhaul in 2010 without any Republican input and without even a single Republican vote in the House or the Senate. They considered their victories in the House and Senate as a mandate to ram through whatever legislation they wanted, Republican opposition be damned! The notion that Republicans have an obligation to treat Democrats differently than the precedent they themselves set is just plain dumb.

So now Cory Booker wants us to think that he is concerned with how changes in healthcare law could hurt people. He said: “It’s going to knock a lot of folks off, hurt long-term care, hurt good working-class folks.” I don’t recall him asking to see the details of Obamacare before it was voted on or doing any due diligence himself to ensure that his party’s plan would not hurt people. What I do recall is that Democrats, most notably President Obama, were not all that concerned when Obamacare caused “good working-class folks” to lose the healthcare converge they previously had. President Obama lied to the American people time and time again, telling us, “If you like the insurance plan you have now, you can keep it,” “If you like your doctor, you can keep your doctor,” and “Premiums will go down.” The opposite has proven to be true….

It’s time for Cory Booker and his fellow Democrats to come to terms with the reality they face. Republicans are in charge now and they are determined to make good on one of their top campaign promises which is to repeal and replace Obamacare. The American people have rejected the Democrat vision for America and see Obamacare for what it is: a complete failure.

8 out of 10 Americans favor changing Obamacare significantly or replacing it altogether.

To be clear Save Jerseyans, I am not a fan of the Republican proposal. At all. I agree with Senator Rand Paul’s view that this proposal looks like Obamacare-lite and leaves much to be desired.

The only upside I see at this point is that unlike their Democrat colleagues, many Republicans have not instinctively gone along with President Trump and party leadership to support legislation for the sake of party unity or “getting things done.”