The Who, Where And How of Ben Franklin’s Legacy Might Surprise You 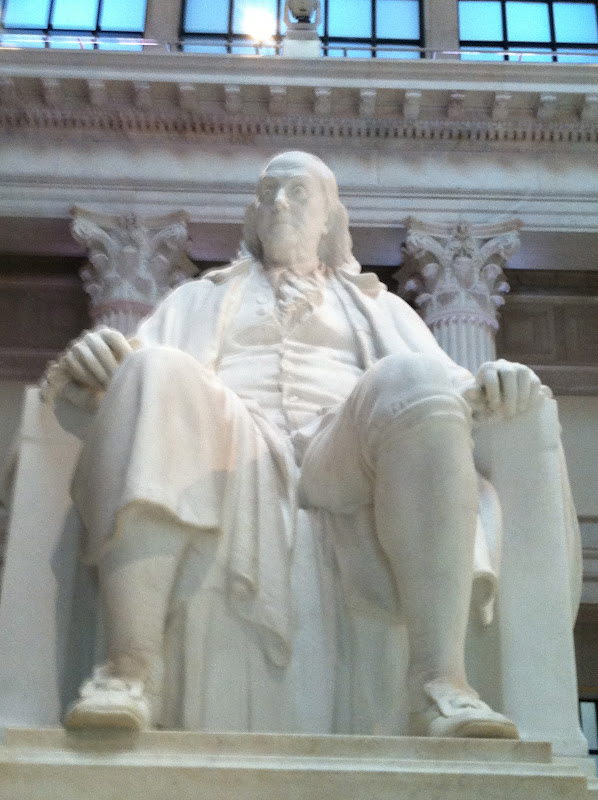 Where is America’s official, national memorial to Benjamin Franklin?

Well, it’s not in Boston which is the city of Franklin’s birth.

And it’s not in the nation’s capital, Washington, DC — a city dotted with memorials to great leaders and national heroes.

It’s in Philadelphia in a grand space on the Benjamin Franklin Parkway atop the steps of The Franklin Institute Science Museum.
And it’s a mighty impressive edifice — nearly every bit as impressive as the Lincoln Memorial.

The centerpiece of the memorial is a dramatic 20-foot high marble statue of Benjamin Franklin. Sculpted by James Earle Fraser, the statue weighs 30 tons and sits on a 92-ton pedestal of white Seravezza marble. Originally opened in 1938, the rotunda was designed by architect John T. Windrim and modeled after the Pantheon in Rome. It measures 82 feet in length, width and height. The domed ceiling is self-supporting and weighs 1600 tons. The floors, walls, columns, pilasters and cornices are made of rare marbles from Portugal, Italy and France.

Designated by the United States Congress in 1972 as the official national memorial to Franklin, and formally dedicated by then Vice President Nelson A. Rockefeller on April 12, 1976, the Benjamin Franklin National Memorial may be the only National Memorial in private hands. As such, The Franklin Institute receives no government funding, support or assistance from the National Park Service, which administers and oversees other national monuments and memorials.

In 2008 the memorial underwent a $3.8 million restoration that included the installation of a multi-media presentation about Philadelphia’s most famous citizen—now featured in the 3 1/2-minute show, Benjamin Franklin Forever.

The memorial’s new digital projection, theatrical lighting and audio effects are fully utilized in a program that introduces Benjamin Franklin as a curious tinkerer—and demonstrates his profound impact on the world as a premiere international citizen, statesman, civic leader and scientist. The refurbishment also includes improved acoustics, state-of-the-art LED lighting upgrades and restoring and re-gilding the oculus to its original brilliance.

Throughout the day, quotes from Ben Franklin are projected onto the walls, and graphic panels highlighting Franklin’s life and accomplishments provide visitors with a still greater appreciation of this Founding Father. The memorial is open to the public at all times when The Franklin Institute is open and no admission fee is required.

BTW: If you visit Philadelphia you can also stop at Benjamin Franklin’s grave at Christ Church burial ground between Fourth and Fifth Streets on Arch Street not far from Independence Hall.

It is estimated that 20,000 mourners gathered for the funeral of Franklin in 1790. Bells of the city church’s were muffled and tolled. When Franklin had arrived in Philadelphia’s port on October 6, 1723, he was a broke runaway. Now the ships in the very same harbor Franklin had arrived in flew their flags at half-mast for the man who had enriched the world.

Franklin was laid to rest several blocks from his home in a relatively simple grave that sits just a few feet from the sidewalk near 5th & Arch.
____