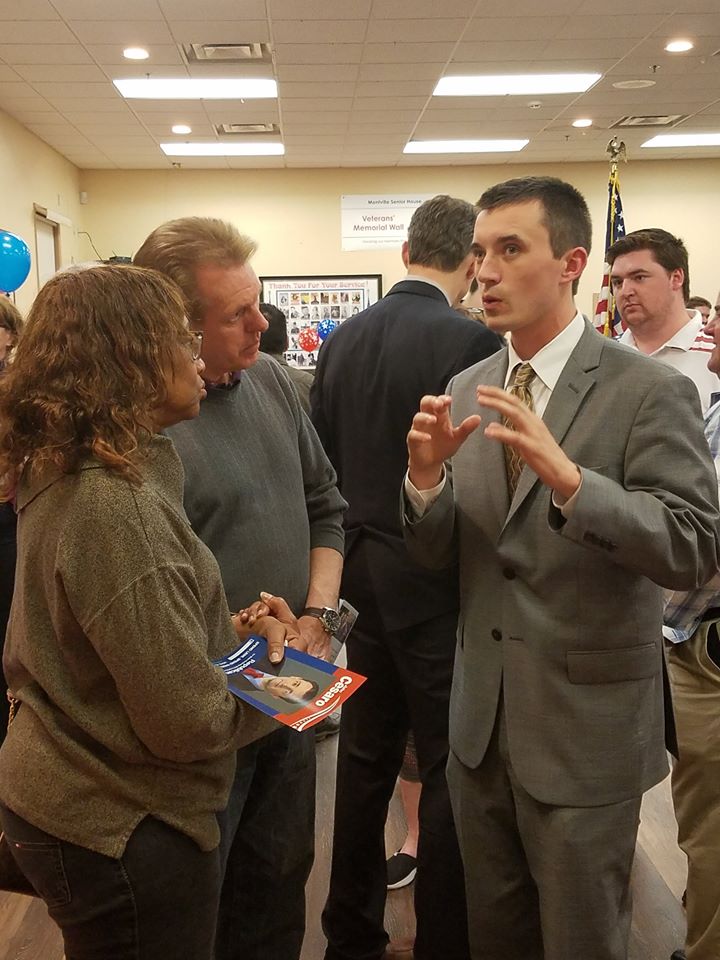 Completing my MBA a couple of weeks ago has opened up some extra time to write; and my timing couldn’t be any better, as the primary in our fair Garden State is just around the corner. A few months ago, I was happy to learn that my good friend, Hank Lyon, had decided to give up his seat on the Morris County Board of Freeholders to seek the GOP nomination for one of the two seats in the 26th District of the New Jersey General Assembly.

Hank not only has a true and consistent conservative record as a Morris County Freeholder, but plans to carry that record with him to Trenton, as well as his ability to listen, research, learn and most importantly, his impressive and steadfast character. His platform advocates many clear reasons why Republican voters of the 26th Legislative District should change course and choose Hank as one of the two candidates to send to the Assembly.

Some candidates this cycle have thrown around the term “conservative” as a buzzword they think will garner votes; even if they may not actually be a conservative. Voting for a 23 cent/gallon gas tax hike and accepting union financial support, in the mind of this National Review Institute Regional Fellow, does not classify a politician as a conservative. And constituents know one cannot hide from their record – if the vote gets ignored it surely does not go away.

Other candidates who use the term conservative are actually conservatives. One such candidate is Hank Lyon. Since his first year on the Morris County Freeholder Board, Hank has consistently advocated for a conservative agenda; and not only talks the talk, but walks the walk. Whether voting to freeze taxes, allow for fair competition in stopping the apprenticeship requirement for firms bidding for public works projects in the county or eliminating healthcare perks for part time freeholders, Hank possesses a consistent conservative record and has built a reputation around the county as a champion of taxpayers.

With the reputation Hank built in Morris County, he has clearly shown himself to be a principled politician; and the fact that he stands by those principles will come along with him to Trenton. Unlike others in Trenton, Hank will not throw up his hands in defeat to the Democrats. He will not bargain away his principles and standards. Instead, he will show resolve, work to get others on his side and fight for his constituents to make sure they get the most for the money paid to Trenton. From reversing the onerous 23 cent/gallon gas tax hike – which has pained families and businesses up and down the Parkway and Turnpike – to cutting excessive regulations so that businesses are financially able to return to the Garden state, to advocating small government solutions in education, government spending and infrastructure improvement; Hank’s impressive conservative agenda and problem solving nature – he was a physics major which already gives him strong credibility as a problem solver – is reason enough for Republican voters to make a change on June 6.

This is clearly a fresh approach to politics on State Street: no deal-making, no compromising of principle, no ties to the special interests. Hank is his own man – not a puppet on a string – as he is funding his own campaign and will pursue his agenda in the interest of the New Jersey taxpayer.

In the six years Hank has been a friend, I’ve had the pleasure to observe him at work for the voters of Morris County. Hank listens intently to multiple perspectives and shows clear evidence of preparation at Freeholder meetings through the comprehensive questions he asks and the commentary he provides. This work ethic has won the respect and admiration of his constituents. He impressed those who had questions about his age and gained their respect, as well as their support.

Additionally, Hank has shown a strong communication ability in face-to-face interactions with the constituents of Morris County; having an ability to connect and follow up with their concerns and commentary.

Hank possesses one of the most impressive levels of character of anyone I know! All his friends and family know this; as we laugh in the face of the disgraceful, untrue and scurrilous attacks and accusations made by desperate opponents who see his impressively consistent conservative agenda as a threat to their own careers. We see the tactics have not changed; but the only change has been the face of the cheap-shot opponents trying to hang on to power like some washed-up former child actor hanging on to that one box office success they had as a 10 year old.

The Hank Lyon I’ve come to know since 2011 called me or checked up on me and my family almost every day as my father was dying of cancer over two years ago; and both Hank and his father spent a significant amount of time at my father’s funeral trying to comfort me, my family and our friends through listening and prayer. The Hank Lyon I’ve come to know is a supportive friend, always there to root on and help someone in need – whether he knows them well or not – from his friends and family to those less fortunate than him that he helps in Habitat for Humanity or Rotary International.

Yes, Hank Lyon is a good friend and yes, I’m going to strongly support a good friend; but I’m also supporting Hank because he is the right person at the right time to send to Trenton to work to solve the problems New Jersey will face in the coming years. Voters need a good reason to make an electoral change, and what Hank Lyon offers – a consistently conservative candidate who possesses the resolve needed in Trenton to not compromise his principles and makes no apologies in pursuing his conservative agenda in the interest of the New Jersey taxpayer; all while doing so in a manner that aligns with his impressive and enviable level of character – is reason enough for him to be the one electoral change Republican voters in the 26th Legislative District would be wise to make on June 6.