It’s a rainy, hazy Monday in August, Save Jerseyans.

Who wants to talk about New Jersey politics? I’d much prefer opining on Westerosi politics. After all, even with all of the carnage, magic, evil and incest… it’s still a little less crazy and incredible than Garden State politics.

Some thoughts from last night’s Game of Thrones episode four for those of you who, like me, are looking for a little distraction:

1. The latest major departures from the books’ trajectory are making me root for (!) the Lannisters. Fist-pumped when Bronn hit the dragon; winced when Jaime charges Drogon. In the books? Cersei is incompetent and cruel; skilled at playing the game but very poor at ruling. In the show? She’s an older, crueler but more experienced and effective Dany. So does it matter who wins? My best guess: Dany’s willingness to heard North to fight the Whitewalkers is what will ultimately distinguish her from the other blonde female tyrant.

2. Littlefinger won’t see Season 8. His high-level games fare well when supernatural forces aren’t on the board but they don’t work when the Long Night is falling and the wolves are circling. It’s the same reason why other master players like Tyrion and Varys also seem… neutered.

3. Remember when the Three Eyed Crow tells Bran that he’ll never walk again but he will FLY? Thinking we’re going to see Bran warg into one of Dany’s dragons at a crucial juncture of the upcoming Whitewalker vs. Humans battle. More ice mixing with fire…

4. Dany and Jon need to get a room already. Worst writing of the season involve their interactions. The writers are trying to be too cute. Make’em flirt already! It’d be much more realistic. And yeah, it’s incest, and it’s gross, but (1) the show already touched that third rail with Jamie-Cersei, (2) Targaryens intermarry by practice, and (3) in the post-show analysis, the producers specifically cited the “heat” between the two. So steel yourselves for another big shock scene, probably before Season 7 is over. 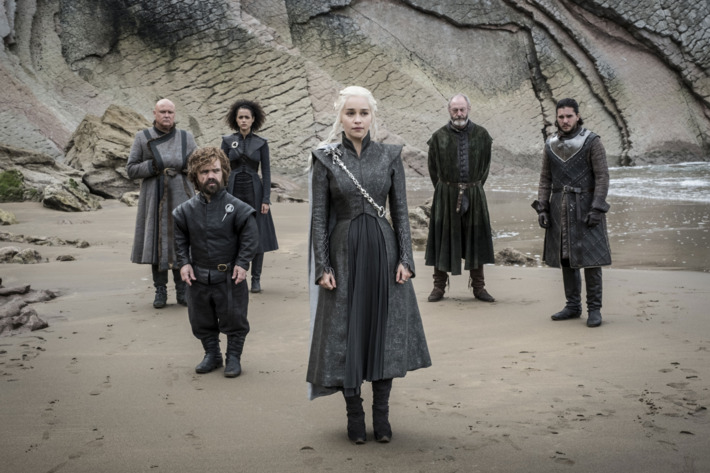 5. Acting overall is taking a backseat from here on out as CGI takes over. Theon is a waste of space at this point. Actors like Charles Dance and Diana Rigg or even Iwan Rheon really made the show what it is. I get it, but I don’t have to love it. Thank God for Bronn and Euron and the Hound to keep us all entertained. Outside of those characters? GOT boils down to awesome graphics and major character investment at this late stage.

6. Whitewalkers aren’t the show’s biggest villain. That distinction is reserved for the Patriarchy. I’m all about women being portrayed in powerful roles, or even assuming traditionally male roles (Brienne and Arya throwing down like Jedi masters) but isn’t it a little forced to see every powerful male either humbled (like Tyrion) or Homer Simpsoned (like Jon “He Knows Nothing” Snow)? The show is trying to make a point and it’s more than a little boorish.

7. Really enjoyed the battle sequence. Much like the Blackwater and Battle of the Bastards, the show runners go out of their way to make the fight seem “real.” You feel like you’re there, watching firsthand as realistic tactics play out, grown men react badly or bravely under extreme stress, chaos ensue when plans go wrong, and all of the carnage omitted from movies pre-Gladiator brings the toll of war home for the viewer. For example, last night’s loot train attack was exactly how I’d imagine a Medieval Battle would go if an F-14 suddenly roared onto the scene.