ONLY when the people are united 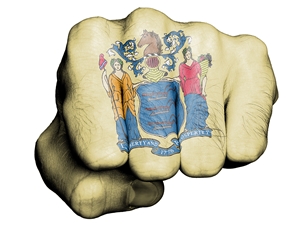 The Save Jersey headline after the January 22nd Trenton Right to Life rally crowed “Hundreds rally for life on the New Jersey State House’s steps.”

Compare that to what happened during a similar rally on the same day in Olympia, Washington, where I once lived, that drew over 5,000 to the steps of the Washington state Legislative Building.

Tell me, how is it that New Jersey pro-lifers muster only “hundreds” when those in Washington state score over 5,000 attendees?

The point isn’t about right-to-life efforts per se, but rather the level of grassroots activism in Jersey which is scant to the point of non-existent, compared to that in another blue state which sees rallies this size or even larger on a routine basis. I used to help organize many of those rallies, and I routinely spoke at them to rouse the troops and call them to action – and they responded by immediately going en masse to the offices of legislators to lobby them. Nothing like having 30 or 40 very aware, very focused and very motivated citizens staring down a law maker forcing him or her to quit waffling and start acting in the people’s interest.

There’s a serious to fatal disconnect between those who think they’re making a difference in the state and what it takes to actually make a difference because mere “hundreds” don’t get the job done — time to ramp it up to thousands upon thousands.

While the statement is leftist in origin, it’s true nevertheless: the people united will never be defeated.

When you don’t hold elective political power the only alternative is to organize, motivate and lead a mass, grassroots political movement to exert very scary pressure on elected types. The left discovered this decades ago but the Right, until the era of Donald Trump and his unique talent to attract and motivate crowds, has largely disavowed the power that comes from organizing the people. Too much time hanging around country clubs and elitist salons, I suppose.

For years, I’ve advocated conservatives read, study and implement Saul Alinsky’s Rules for Radicals, which is as apolitical – in other words, it isn’t premised upon a particular political point of view – a guidebook to organizing as you’ll find. If you want to learn how the powerless can come together to wrench power from those who have and abuse it, read, learn and do.

Fruitless campaigns for office from candidates underfunded to the point of poverty aren’t a productive strategy. Organizing the people, however, can be if you’ll do it.

Ordinary people don’t pay attention to campaigns for office until two or three days before they have to cast a vote. But if you catch their attention by being in their neighborhoods talking with them on a near 24/7/365 basis, then you can recruit them into a movement, and it’s a movement New Jersey conservatives, pro-lifers, school choice advocates, gun owners and others jointly need.

And you can forget using the New Jersey Republican Party at any level as an instrument of grassroots organizing. In my seven years in the state watching it, I’ve become convinced it exists to protect its functionaries, apparatchiks and strangle-hold power over the existing political process. It’s both quite content to be perpetually in second place so long as it gets goodies from the public trough and as much the enemy as newly inaugurated Gov. Phil Murphy (D-EastCalifornia) or any of the progressive hangers on in the state. You won’t win or even make progress by going into the lion’s den to make nice with the lions because they’ll eat you as soon as look at you.

You needn’t have numerical superiority to win, either. Motivated, focused, intense, fearless, loud, proud and in your face activism with a strategy and an in-sight end game can defeat hapless, helpless and hopeless lackadaisical political lackeys. The evidence of history teaches us that, so it’s imperative we learn and put those lessons into practice. Power to the people!

It’s either that or be satisfied with mere hundreds destined to lose.