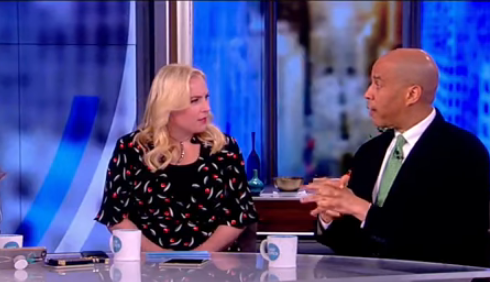 NEW YORK, N.Y. — U.S. Senator Cory Booker (D-Twitter) visited “The View” on Monday and, unsurprisingly, refused to distance himself from Hillary Clint’s latest wacky comments (accusing Trump of trying to deprive African Americans of rights, and women of jobs, during a trip to India).

“First of all, the election is over and has passed,” Booker told co-host Meghan McCain. “We have to, in this coming ’18 election – forget 2020 focus on right now – we have to begin to see each other for the truth of who we are.”

When McCain asked if Clinton was hurting the Democrat Party, Booker offered only a verbal shrug

“Again, Secretary Clinton lost the electoral vote. She is not president of the United States. My focus is on the future,” Booker responded.

Even leading Democrat colleagues, including Dick Durbin (D-IL) and Claire McCaskill (D-MO), have parted with Clinton over her comments which even the former candidate herself felt the need to explain in a long, rambling Facebook post.