TRENTON, N.J. — The fall cycle is in full swing, Save Jerseyans, and dead voters are receiving vote by mail notices while thousands more (among the living) are finding error-riddled ballots in their mail boxes.

The alleged root of the chaos plaguing county clerk offices around New Jersey? An onerous new August law enacted by Democrat Governor Phil Murphy which mandated that anyone who voted by mail in the November 2016 general election will receive mail-in ballots for Election 2018 as well as any and all future N.J. elections until such time as they opt out. Clerks’ offices are complaining they can’t keep up with the increased volume, resulting in a higher-than-usual number of mistakes.

Election officials are expecting confusion at the polls, too, as voters who never opted-out show up expecting to vote.

Over the weekend, none other than former Republican Lt. Governor Kim Guadagno, who served in that role from 201o to 2018, took to Facebook and went after Governor Murphy and his mail-in ballot changes for precluding her son from participation in the November 6th election: 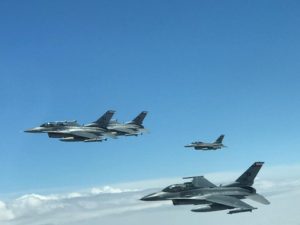 So a kid who fights for his country cannot vote because the mail in ballot (he never requested) cancels his email ballot. Really??? Someone please tell me the law doesn’t work that way.

He is flying an F-16 in the picture below.

Share if you think NJ got this one completely wrong. Or please tell me I have it wrong. Mad does not describe it. Dismayed? Incredulous? Outraged?”

Guadagno’s son graduated from pilot training at Vance Air Force Base in Oklahoma back in spring 2017.

Later that year, riding a wave of anger directed at her boss, then-outgoing Governor Chris Christie, Murphy bested Guadagno by a double-digit margin in the general election.

New Jersey is home to between 7,000 and 8,000 active duty personnel, raising the question as to whether Guadagno’s son’s plight is unique this election season.