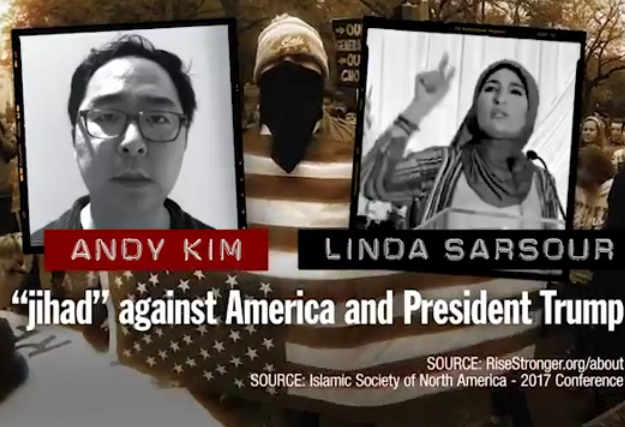 And what does it have to do with this year’s closely-fought NJ-03 House contest between Republican incumbent Tom MacArthur and Democrat challenger Andy Kim?

Don’t Google it. You won’t find it. The website has been taken down (though there’s still a live Facebook group which hasn’t been updated with a new post since August).

In TV ad #1– “Mumia and Bill” – Team MacArthur says the organization founded by Kim (enter “Rise Stronger”) at one point promoted not just the written works of convicted cop killer Mumia Abu-Jamaland but also those of Bill Ayers of Weather Underground infamy.

The catalysts for the hard-hitting ads were apparently Kim’s own comments during an October 11th Facebook LIVE event hosted by the Asbury Park Press during which the Democrat responded to a question about Rise Stronger:

Andy Kim: “What I started was a Facebook group that was trying to get citizens excited about politics and find ways in which to channel some of their concerns into action, voter registration, a conference that was trying to give people some policy ideas on what was happening. And that’s what this was about. It was a volunteer effort, a Facebook based operation…”

Randy Bergmann (APP): “What is this group that the Congressman’s referring to?”

Andy Kim: “A volunteer group that I organized off of a Facebook group that I set up where people could come and have discussions about politics…It was something I only did for a couple of months before I stopped working there or with this group. That’s all this was.”

The “Facebook group,” MacArthur says, was actually a national organization, incorporated, and responsible for organizing conventions and even national protests in the wake of Donald Trump’s ascension to the presidency.

“Andy Kim has a disturbing disregard for the truth and it reared its head again during a Facebook Live event with the Asbury Park Press. The resistance group he started was not simply a ‘Facebook group’. How many Facebook groups do you know have a Board of Directors, incorporate in Delaware and file with the IRS?” said MacArthur in a statement.

“Andy Kim is not the bipartisan moderate he claims to be. He is running to protest Trump, not serve South Jersey. He started a resistance group, planned a conference, promoted books by a cop killer and a domestic terrorist, organized national resistance marches, and produced literature and other promotional materials calling for revolution. This is no moderate. He is partisan warrior, plain and simple,” he added.

NJ-03 is considered a toss-up at the moment per public polling.