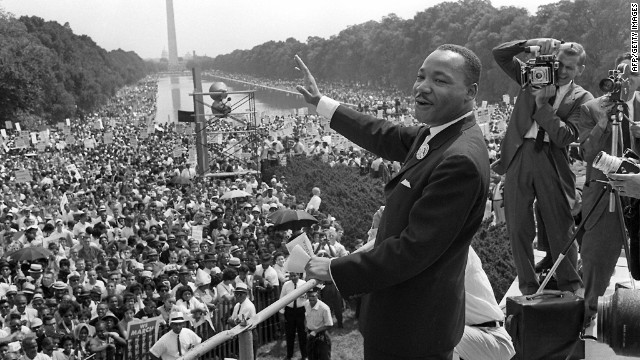 Lots of memes and quotes are flying about but not much substantive discussion of WHO this man really was, and how the slain civil rights icon’s remarkable life story fits into today’s consequential policy and societal debates, is taking place on the news/Twitter/in classrooms today. There’s some misinformation afoot, too. Political manipulation of course. #FakeNews abounds.

So let’s talk about Martin Luther King, Jr., the man AND the myth:

Like most historical figures? MLK was a complex man. One of undeniably great courage and conviction, he brought the civil rights movement into the forefront of the American consciousness at a tipping point in the battle of legal equality. The Reverend was also a radical leftist on the economic front and, at least the JFK-era FBI contended, an allegedly less-than-loyal husband. Snopes (which is sometimes too biased to be effective) has a balanced discussion of the MLK sexual allegations here.

I’m far more concerned with the economic angle; he was very similar to Gandhi (whose teachings visited a lot of economic harm on the Indians he was trying to help): a man possessing great ideals but who espoused a less-than-great execution of those ideals.

Like any other famous figure in the history books, his writings and speeches have been manipulated to fit different agendas since his assassination. What we can say for sure: Dr. King (1) criticized BOTH the Republican and Democrat parties during his lifetime, and (2) vehemently opposed communism on the basis of its moral relativism, obsession with materialism, and its totalitarian tendencies: “In communism, the individual ends up in subjection to the state. … And if man’s so-called rights and liberties stand in the way of that end, they are simply swept aside. His liberties of expression, his freedom to vote, his freedom to listen to what news he likes or to choose his books are all restricted.”

So I doubt that, then as now, King would’ve felt entirely at home in EITHER party in 2019. Republicans can’t claim him any more than the Democrats can (despite what they’d lead you to believe), a poignant point of reflection as Democrat-dominated California moves to allow Communists to hold state office.

#2 – Black Americans have suffered terribly at the hand of Leftist policies, some of which MLK supported.

Modern American politics could certainly benefit from MLK’s moral example, but as I started to explain above, Save Jerseyans, his economic policies weren’t as admirable as his civil rights legacy.

“You can’t talk about solving the economic problem of the Negro without talking about billions of dollars. You can’t talk about ending the slums without first saying profit must be taken out of slums. You’re really tampering and getting on dangerous ground because you are messing with folk then. You are messing with captains of industry. Now this means that we are treading in difficult water, because it really means that we are saying that something is wrong with capitalism. There must be a better distribution of wealth, and maybe America must move toward a democratic socialism.”

King died before he could see where a ‘war on poverty’ would leave black America. As Ronald Reagan later quipped, “[i]n the 60s, we waged a war on poverty, and poverty won.” Black Americans were this war’s greatest casualty as post-WW2 social mobility stagnated thanks in large part to the unintended emphasis LBJ’s “Great Society” placed on concentrating poverty. Legendary black economist Thomas Sowell once opined that, “[i]f we are to go by evidence of social retrogression, liberals have wreaked more havoc on blacks than the supposed ‘legacy of slavery’ they talk about.“

What’s undeniable: Black America might be a lot better off today at Richard Nixon defeated JFK in 1960 (or if JFK — an adherent to supply side economics) had not suffered the same awful fate as Dr. King.

South Carolina was the hotbed of secession, Confederacy and the American Civil War. Today? This Republican stronghold is home to Tim Scott, the GOP’s black U.S. Senator who gets a FRACTION of the coverage afforded to Kamala Harris, Cory Booker, or other black Democrats whose worldview more closely aligns with that of the media establishment and cultural elites. Unfortunately, whether it’s Senator Scott or Kanye West or Dr. King’s own niece (who is an outspoken conservative activist), any black Americans who are brave enough to espouse conservative or less-than-orthodox (read: negative) views concerning the GOP is berated by the media and the Democrat Party it serves as traitorous “Uncle Toms.”

The irony is as rich as it is sad given that the GOP (1) freed the slaves and (2) helped Lyndon Johnson get civil rights past a hostile Democrat Congress. It can be argued that the single greatest force holding back black America today is black voters’ unflinching fealty to the Democrat Party which, in turn, has allowed Democrats to take them for granted and turn a blind eye to the criminally-bad consequences of Leftist policies in our urban and rural communities.

#4 – President Trump’s approval rating with black voters is stronger than many know.

The charisma of FDR and the Kennedy brothers helped move black voters in the Democrat column. Maybe the Trumpster is starting a trend. TBD.

He’s earning their support with results. Last spring? Black unemployment hit its lowest level since 1972 – when Richard Nixon was president. Far more Americans of all ethnic backgrounds are working today than under our social justice warrior president Barack Obama thanks to President Trump’s pro-growth, pro-business, pro-tax cut, anti-regulation policies. The recent criminal justice reform legislation was also championed by President Trump; Barack Obama failed to pass any such measure during his eight years in office (including the first two when his party had control of Congress).