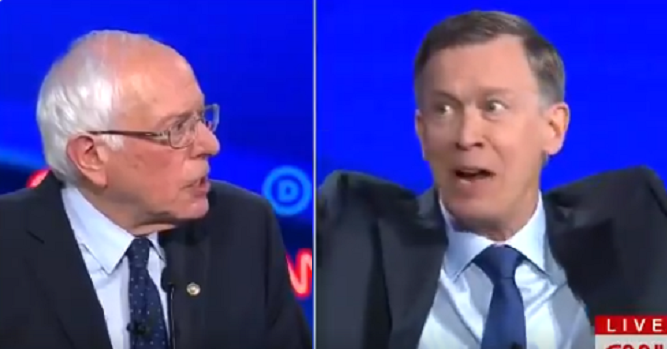 I could go on, and on, and on about the clown car train wreck on acid that was Tuesday’s night (round 1) of the second 2020 Democrat primary debate, Save Jerseyans, but what would be the point of that? If you watched then you already know, and if you didn’t, I’m sure you can imagine.

In the interest of making our time together useful, I’d instead like to focus on the exchange that jumped out at me as being illustrative of the sorry state of the Democrat Party once led by men like FDR, Truman and JFK.

Unsurprisingly, our lazy mainstream media was more interested in how former Colorado Governor John Hickenlooper mocked Bernie Sanders’ trademark gesticulating hand movements during a particularly heated part of the debate. And yes, it was sort of funny:

Hickenlooper’s substantive criticism of Sanders and his comrade Liz Warren was far more important and worth internalizing for anyone genuinely interested in what’s happening to the Democrats in the Trump Era.

JAKE TAPPER: Governor Hickenlooper, I’d like to hear what you say about Senator [Elizabeth] Warren’s suggestion that those people on the stage who are not in favor of Medicare for All lack the political will to fight for it.

FMR. GOV. HICKENLOOPER: Well, obviously, I disagree with that as much as I respect both of the senators to my right. You know, it comes down to that question of Americans being used to being able to make choices, to have the right to make a decision. And I think proposing a public option that allows some form of Medicare that maybe is a combination of Medicare Advantage and Medicare, but people choose it, and if enough people choose it, it expands, the quality improves, the cost comes down, more people choose it, eventually, in 15 years, you could get there, but it would be an evolution, not a revolution.

Warren got pissed and completely deflected.

“You know, we have tried this experiment with the insurance companies,” the Massachusetts Senator insisted responding to moderator Jake Tapper’s request for a response to Hickenlooper. “And what they’ve done is they’ve sucked billions of dollars out of our health care system. And they force people to have to fight to try to get the health care coverage that their doctors and nurses say that they need.”

That’s total bullshit, of course. But did you catch the enormity of Hickenlooper’s observation? And Warren’s reaction?

The part when she had no intelligible response concerning “Americans being used to being able to make choices”?

That’s called FREEDOM, Senator. Liberty. The entire point of breaking away from Great Britain and fighting two successive world wars. In this country, the government isn’t supposed to dictate to the governed how to live, what to buy, and the limitations of liberty; it’s the other way around per the Constitution.

Democrats like Bernie and Warren aren’t down with all of that.

If elected, they’re going to take away the private insurance of 5.4 million New Jersey families – and millions more across the country – and impose their will upon us. Section 107 of Bernie’s bill accomplishes this extraordinarily undemocratic and unconstitutional power grab by making private insurance coverage illegal if (pay attention now) it duplicates benefits provided by the government (which would de facto preclude ALL private plans in a fully-socialized system).

Btw – our very own U.S. Senator Cory Booker is a co-sponsor of the following language:

(a) In General.—Beginning on the effective date described in section 106(a), it shall be unlawful for—

(1) a private health insurer to sell health insurance coverage that duplicates the benefits provided under this Act; or

Shocked? Not sure why.

Booker/Bernie/Warren have no problem with any of this because they don’t believe in that hokey, antiquated “freedom” thing. That’s the Democrat Party in 2019. They won’t even deny it anymore. Candidates like Hickenlooper who are unlikely to make it too deep into the process are trying to sound the alarm bell because, for all of his faults, Hickenlooper figured out how to win a purple state. He knows Americans outside of deep blue territory will balk at what socialism’s inherently un-American hostility to individual choice and liberty.

It’s starting to look like the Democrats’ leading candidates don’t care. It’s revolution or bust for them, and I’m starting to think they’ll pay a steep electoral price without a quick course correction.