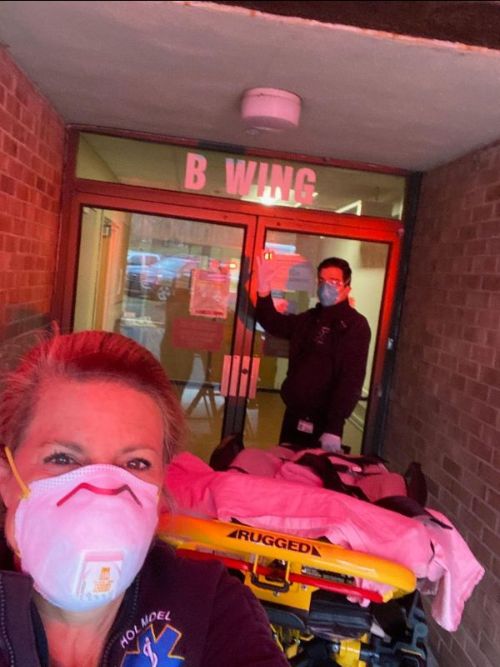 HOLMDEL, N.J. – While most mid-level elected official have thrived on cliches during the present COVID-19 pandemic, one New Jersey legislator has spent considerable time volunteering with the Holmdel First Aid Squad.

“I like being able to give back to the community in an anonymous way. When I go out on calls, people don’t even know it’s me,” said Assemblywoman Serena DiMaso (R-13) of Holmdel, who is also her town’s former mayor and an ex-Monmouth County freeholder. “You don’t do this job for the credit, you do it to help the residents who are in need of assistance.”

DiMaso initially volunteered for the 55-member squad back when she served as Holmdel mayor. It’s a family affair: her husband is a doctor, and the Assemblywoman serves as chairwoman of the Bayshore Medical Center Foundation

She used to volunteer on Monday nights before the Wuhan virus outbreak. Now, with the legislature convening sporadically (and remotely), DiMaso is making it a daily affair.

“We have five nursing homes in our community, so we are coming to the aid of many senior citizens right now,” said DiMaso. “Many of our calls deal with people who believe they are infected with COVID-19, so there is a matter of educating people on the symptoms and taking the extra precautions to protect ourselves and patients as well as disinfecting the ambulance. Everybody right now is getting a mask.”

Monmouth is one of New Jersey’s hardest hit counties with 870 cases as of Monday; that’s a higher total than 29  U.S. states.

“Thankfully we are prepared to do whatever needs to be done to care for the residents. It’s a team effort,” said DiMaso. “Whether that means we are working 12-hour overnight shifts, or quickly changing from our civilian clothes to answer a call, we are here to save lives. Out of all the things that I spend my time doing, this is the work from which I draw the most satisfaction. You get an immediate response from helping someone.”

Correction: An earlier version of this story identified Asw. DiMaso as an “EMT” when, in fact, she is an EMR (Emergency Medical Responder). We apologize for the error.