Murphy comes clean to Tucker Carlson: “I wasn’t thinking of the Bill of Rights” (VIDEO) 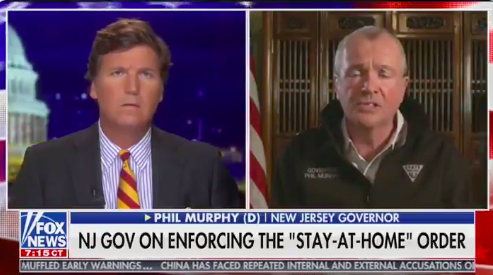 I’ve been saying it for awhile, Save Jerseyans… I just never expected Phil Murphy to admit it!

On Wednesday night’s edition of Tucker Carlson’s Fox News program, the host grilled our governor over his authority (or lack thereof) to curb the Bill of Rights and ban in-person church services in the name of stopping COVID-19.

“I wasn’t thinking of the Bill of Rights when we did this,” Murphy replied, lamely offering that Tucker’s question was “above his pay grade.”

“The science says people have to stay away from each other,” Murphy added.

Yikes! This was Phil Murphy’s Colonel Jessup ‘you’re g-damn right I ordered the code red’ moment, folks. It really was. His delivery was calmer than Jack Nicholson’s, of course, but you can tell the governor was annoyed at having to defend what he clearly believes is HIS right to decide which of our rights are inalienble and which aren’t. Resentment simmering beneath the surface… you could see it.

I look forward to his answer being introduced in the inevitable constitutional court battle over all of this.