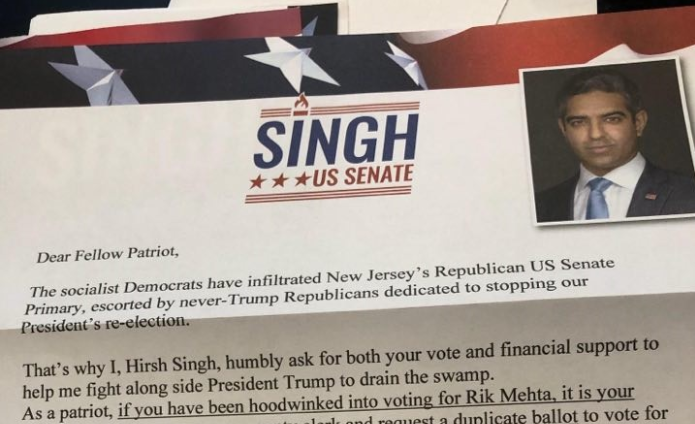 Update: The N.J. Attorney General’s Office has sent a ‘cease and desist letter to Hirsh Singh…

TRENTON, N.J. – Letters encouraging voters to return their mail-in ballots aren’t out of the ordinary in an age of increased remote voting.

Letters asking voters to request a second mail-in ballot if they already voted for someone else? Far less common. Unheard of, in fact.

The campaign of Hirsh Singh – a Republican running for U.S. Senate in the July 7th primary – mailed one such letter received by GOP voters who spoke with Save Jersey (see below).

“As a patriot, if you have been hoodwinked into voting for Rik Mehta, it is your patriotic duty to contact your county clerk and request a duplicate ballot to vote for the only Conservative Hirsh Singh. Your duplicate ballot will replace your earlier ballot,” explains the letter signed by the candidate… 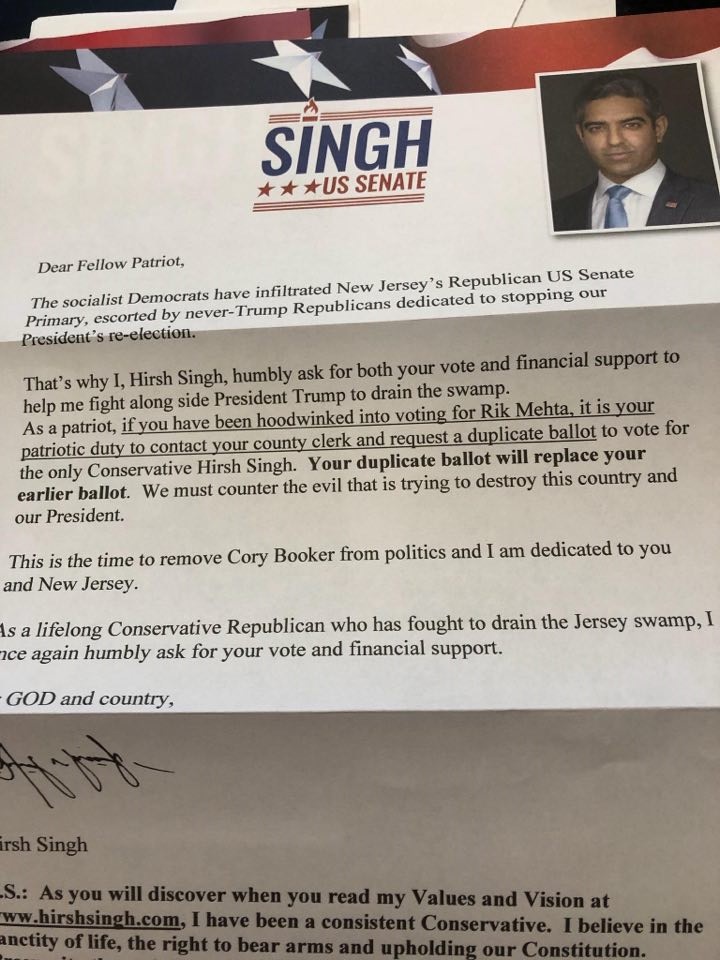 When reached for comment, candidate Singh told Save Jersey that his campaign checked with county clerk offices and proceeded on information supplied “in good faith.”

“Our campaign talked to the offices of multiple county clerks and were informed that if a voter sent in a mail in ballot and also voted by provisional ballot, that only the vote by mail would be counted,” Singh told Save Jersey. “This was also discussed between county clerks and their constituents for weeks. We were also informed that a duplicate ballot would supersede an original ballot. We are informing the voters on their rights that are protected by the US Constitution and the First Amendment.”

“This was discussed not only between our campaign and county clerk offices, but also between the county clerks and their own constituents,” Singh replied when I asked which clerk offices his campaign interfaced with. “I’m not going to put a target on anyone’s back. I was given this information in good faith.”

“In all my years participating in Republican politics this is a first! Singh is telling voters, vote early and if you change your mind, vote again. Al Capone would be proud.” said Rich Ambrosino, chairman of the Camden County GOP. “I never thought I would live to see the day when a candidate for any office actually begged voters to change a vote they already cast.”

“Perhaps you are unaware but just as you are now allowed to get back in line at a polling place to vote a second time you are not allowed a second mail-in ballot after you have submitted your first,” explained Barlas who also urged Singh to send a new letter to “correct the record.”

The winner of the U.S. Senate primary will face Cory Booker in November.