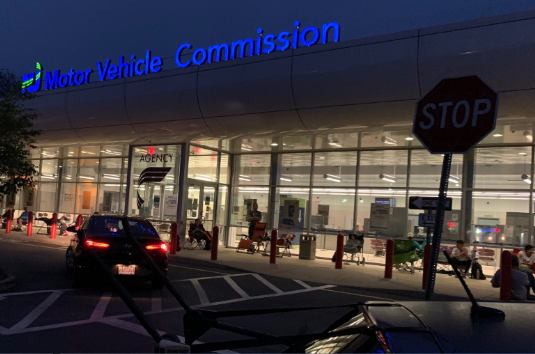 Wednesday morning dawned and brought yet another scene of long lines at some MVC location across the Garden State.

The state’s motor vehicle facilities were slammed on Tuesday, the first day they were reopened in nearly four full months due to COVID-19. Clearly, no one in the Murphy Administration used the time to prepare.

Good morning #NJ! It’s 5 am & the line already wraps around the Flemington MVC. After 4 months of full pay & a good night’s sleep @GovMurphy & MVC Commissioner @suefulton will once again turn away thousands of taxpayers they can’t serve & don’t care about. #MurphyExposed #NJGOP pic.twitter.com/jafDf1JFt5

Hundreds of people in line since 11pm last night in the heat&humidity sleeping on hot concrete in line outside Medford Motor Vehicle office think these are TERRIFIC suggestions. After reading tweet off my phone, one in line said “i wish this guy was the Governor.” @FOX29philly https://t.co/gjDGJLVTyH

Medford Motor Vehicle Mgr “We’re getting better” at this now in Day 2. He handed out tickets with numbers for the maximum number of people it can serve before 4:30pm closing time just 240 people. As those 240 get to front desk they give phone number 1/2 ⁦@FOX29philly⁩ pic.twitter.com/DCsTeUvEoE

240 limit in Medford&now 275 limit in Turnersville. At least no one will wait outside in heat&humidity all day only to be turned away at 4:30 closing time&told “try again tomorrow”. But this will cause all night sleep outs again tonight to be among 240&275 everyday @FOX29philly https://t.co/tJL0CugCK6

Incompetence is a hallmark of the Murphy Administration.

So is a refusal to accept responsibility.

His MVC chief Sue Fulton insisted her agency was doing everything it could in a Tuesday statement. No one believed that was true but she said it anyway. On Wednesday morning, Phil Murphy told CBS 2 (New York) that it was New Jersey residents’ fault. Yes, you read that correctly.

“A lot of folks are in line that don’t have to be in line,” said Murphy. “And that would be a huge game-changer for everybody.”

That’s B.S. by the way. Many tasks require a face-to-face encounter with MVC officials. The website is notoriously limited. Still, Murphy’s incredible statement implicates something fat bigger (and darker) than his erroneous claim that people didn’t need to show up in person.

Assemblyman Jay Webber (R-26) said Murphy’s refusal to accept blame was typical of what you’d expect from a liberal… or a dictator:

.@GovMurphy faults US for @NJ_MVC nightmare. Real cause: total incompetence of Murphy Admin.

Blaming the people is the natural instinct of liberals & dictators.

What’s most troubling about the Murphy Administration isn’t the volume of its mistakes but the Governor’s consistent refusal to accept any responsibility whatsoever for those mistakes.

He points fingers. He makes excuses. No one ever gets fired and held accountable (as was the case during the Katie Brennan scandal, the unemployment system meltdown, and the ongoing mass fatality event in our long-term care facilities). Everything is someone else’s fault.

Our abnormally massive COVID-19 death toll is directly related to HIS decision to restrain long-term care facilities from refusing positive patients. His response to this deadly error? A crackdown on civil liberties, the implication being that, once again, it’s our fault. Not his.

It’s impossible to not connect the dots between his actions and his ideology. Murphy sincerely doesn’t think government – personified by himself – needs to explain itself, least of all to the people it’s supposed to serve. He’s a statist. That’s what they believe.

“Gov. Murphy says government is the answer. Ask folks waiting in line at the MVC, residents who’ve gone months without unemployment support, or families with loved ones forced into nursing homes w/ COVID-19, how this administration does with answers,” opined Jack Ciattarelli who, like Steinhardt, wants to challenge Phil Murphy in 2021.

Is someone who thinks like Murphy really the sort of person who should be in charge? Especially when a pandemic is raging? And an economic crisis is building? Think before you answer. Think carefully. Lives and livelihoods are on the line. Many are already beyond saving. New Jersey voters will need to live with that, but we can start to make amends next year.

Save Jersey’s Founder and Blogger-in-Chief, MATT ROONEY is a nationally-noted and respected New Jersey political commentator. When he’s not on-line, radio or television advocating for conservative reform and challenging N.J. power-brokers, Matt is a practicing attorney at the law firm of DeMichele & DeMichele in Haddon Heights (Camden County).–