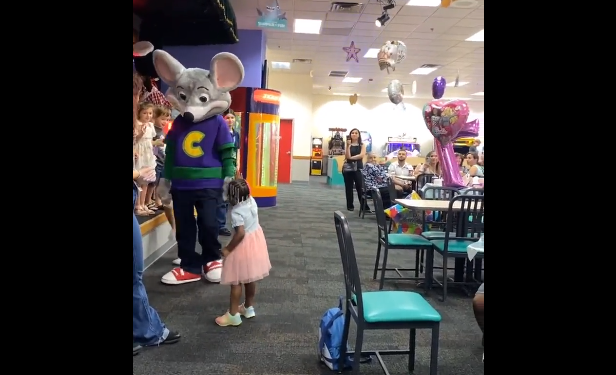 Chuck E. Cheese has been where “a kid can be a kid” for three decades, but the Wayne, New Jersey location of the iconic ’90s theme restaurant is grappling with allegations of racism.

An honest misunderstanding? Or something more sinister?

Natyana Muhammad, the mother of the allegedly snubbed black two year old, posted a video on Twitter this Sunday depicting an employee costumed as Chuck E. Cheese failing to reciprocate a high-five from the very excited child.

“On July 30 at Chuck E Cheese in Wayne, NJ, my 2yo was racially discriminated against,” Muhammad tweeted. “As you can see, he gives all of the yt kids hi-5s & PURPOSELY ignored my black baby. When confronted, he ignored me as well. The manager, Angie Valasquez, made excuses for him.”

“As home to millions of families and kids every year that celebrate the big and small milestones, including fun, our goal is to create an inclusive experience for children and parents of all ages, races, ethnicities, religious backgrounds, and learning differences,” the company told ABC 7 Eyewitness News on Monday.

The incident mirrors similar allegations at another tri-state area institution (Sesame Place in Eastern Pennsylvania) which are currently making headlines.