Say what you will about the bias of the United States new media Save Jerseyans. It is true that sometimes they can be pretty ridiculous or even downright biased. However, our free press could never come close to creating the sadness that comes over me when I saw this story today out of the Egyptian state run media.

Egyptian President Hosni Mubarak participated in last weeks peace talks in Washington. Since the talks were kind of a big deal, the American media was in full force and the AP snapped the top photograph (found below) of the leaders walking through the White House. By the time the photo made its way to the Egyptian papers, something had happened. There are only two possibilities here Save Jerseyans. (1) Spacio-temporal continuity has become completely unhinged, and the end of the universe is, in fact, imminent, or (2) The Egyptian state media has acquired a copy of Adobe Photoshop and hired the BP graphic artist who made similar gaffes earlier this year. I am more partial to the latter explanation. Clearly the Egyptian government is intent on making it seem like it is leading the charge for peace in the Middle East.

Although it seems quite harmless, there is so much thats sad about this story. First, I am sad for the Egyptian government’s inferiority complex to the United States and its need for overcompensation through a meaningless photograph. Then I am sad for the Egyptian people. In a nation with a state run media, it is almost certain that they have little to no access to outside sources that can tell the truth. I know that this little lie is basically harmless, but if Egypt will go to this much trouble to lie about where President Mubarak was walking, what else could they be lying about? I am no expert on Middle Eastern media, but I have a feeling that they would make our outlets look like saints. 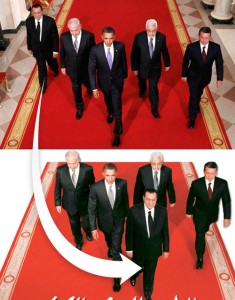