This post must start with a fact that everyone reading this blog surely knows: Governor Christie is a rockstar. His rookie year as Governor of our state has been one of many political triumphs coupled with strong approval ratings and an ever stronger presence at town hall events where his soundbites earn viral status online. Governor Christie has become a hot commodity, and will be spending the next few weeks traveling the county on behalf of some very lucky Republican candidates. I’d be willing to bet that Christie has seen more requests for appearance this year than the seemingly toxic President Obama. 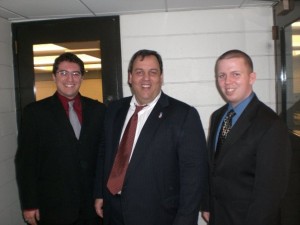 Now, we all know that the Governor has insisted on numerous occasions that he does not intend to run for President, but c’mon…a stop in Iowa isn’t even subtle. I seriously doubt a Christie run for the White House in 2012, but to even suggest that this national tour wont be used as a gauge by those politically close to the Governor would just be naive.

In anticipation of the obvious critical comments that will come from this news: According to NJ.com, (1)The only cost to the NJ taxpayers will be security for the Governor, which is paid by us even when he is here, (2) All costs for travel and expenses when on the trip are being paid by the campaigns across the country, (3) Christie is not abandoning his work for our state, he will be back in NJ for a few days out of each week and on the weekends.