The Only Thing I Should’ve Changed is the Quotation Marks

WARNING: Don’t continue reading this post if you’re looking for an apology. 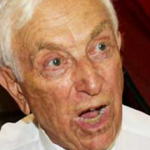 Last night, I posted a short YouTube video produced by student from Rumson. The video cuts off prematurely, but it sounded like Senator Frank Lautenberg (D-NJ) called on Americans to help him “eliminate the rich.” National new media luminaries including Andrew Breitbart, Mark Levin and the good folks over at Fox Nation quickly picked up the story and took the video viral.

Is it my fault that the Senator doesn’t pronounce his w’s properly?

Upon several more replays with the volume pumped WAY up, it does sound like he may’ve said “waste” instead of “rich.” Even New Jersey native Michelle Malkin isn’t sure, but the Senator’s staff vehemently denies that he said it. We’ll take them at their word that he said “waste.”

But let’s be ultra clear about one thing, Save Jerseyans: when I titled the post Lautenberg Finally Loses It: “We Got to ‘Eliminate’ the Rich” the only correction necessary is the removal of the quotation marks!

Even if he didn’t literally say “eliminate” the rich, he certainly communicated the exact same sentiment in his remarks:

SENATOR LAUTENBERG: There is that opportunity along the way. But I’ll tell you, there’s another place to get your money. And it’s to get it from people like me, who made their successes because of the infrastructure, the human infrastructure that the United States has. And we ought to pay more in our taxes for the values — for the things that we’ve gotten as a result of the extraordinary middle class that we have in this country.

But we shouldn’t discover that — shouldn’t, uh, offend them and say, “OK, you’re — you can’t take care of your family? Too bad.”

“And the” what? Elimination of the rich? We don’t know if that came next. I wasn’t there.

But read the text that is there!!! He did identify the rich as “another place to get your money” and went off on a crazy, left-wing “soak the rich” rant. Is it NOT a robbery if the criminal points the gun at his victim and says “put your hands up!” Does he have to specify that “this is robbery” to make it a crime? Of course not! The Laut said what I said he did, even if it took this ancient millionaire 172 words to get out instead of three! I’ve heard Pallone do it in under 20.

Check the vid out for yourselves: