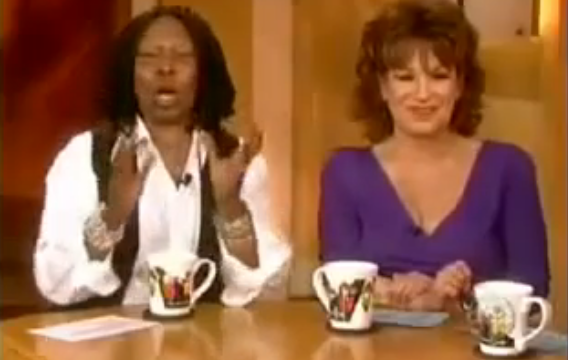 Talk about the pot calling the kettle black, Save Jerseyans!

Specifically, yesterday’s episode of ABC’s ‘The View’ featured three fat pots (Whoopi Goldberg, Joy Behar, and Sherri Shepherd) making fun of Governor Chris Christie’s waistline, all while an old pot (Barbara Walters) and a relatively more attractive pot (Elisabeth Hasselbeck) tried to rein them in. What this had to do with the Governor’s Tuesday evening Reagan Library speech, the topic that initiated their conversation, I can’t tell you. We’re talking about the ‘The View.’ It’s not supposed to make sense.

CAUTION: I highly recommend doing a few shots before subject yourselves to this…

I’ve been meticulously tracking Christie fat jokes for almost three years now, Save Jerseyans. They invariably resurface as fashionable in liberal circles every time the Big Guy is making political headway, and conservative advances make liberals angry/confused/upset. They’re emotional creatures! Whoopi & Co. simply can’t express rage in a more intelligent way. Emotion bubbles up, boils over, and spills out in the form of… lame fat jokes. Logic is completely absent from the equation.

The only thing that continues to redeem Whoopi in my eyes is Sister Act. Great movie. I just wish she’d exercise a little Christian charity and keep her political swipes above the belt.

119 thoughts on “Fat Ladies On ‘The View’ Make Fun of Chris Christie’s Fat?”